Land records can give us loads of information about our ancestors. But what do you do when you go through the deed index and you can't find your ancestor's land records? There are some reasons why you're not finding them. Fortunately, there are some ways around it. Before we get into it, let's get this out of the way...  Your ancestor might not have owned land. However, before you decide to skip land records completely, consider that your ancestor might appear in records other than deeds. Could he have attempted to purchase land? Look in mortgage records which are sometimes available in the same office that records deeds. Look also for records of tenant farming and sharecropping agreements.

You're Looking in the Wrong County

Most states weren't formed with all of their counties already in place. County boundaries evolved over time. The records are going to be in the county where the land was at that time. My ancestor Peter Starkey purchased land in what is now Perry County, Ohio. However, when he bought it, that land was still part of Fairfield County. I would have to look in Fairfield County's records for the purchase.

Similarly, if you can't find a sale of land you know your ancestor had, look to see where there land was located. Is it now in a different county? If so, you need to look in that other county for the sale.

Your Ancestor Didn't Record a Deed

Deeds cost money to file. They also require a trip to the courthouse. If your ancestors were like mine and they were cheap...  I mean, frugal...  they might have skipped recording the deed if they had another document that proved the transfer of ownership.

Several of my early Ohio ancestors purchased land directly from the Federal government, yet never recorded that purchase with the County Recorder. They probably figured that the certificate they received from the Federal land office was good enough.

I've also seen countless examples of people receiving land in a will, but who never recorded that transfer at the Recorders Office.

Your Ancestor Isn't Listed by Name

If your ancestor sold land as part of a group, perhaps with his or her siblings, he might not be listed in the grantor (seller) index by name. Some clerks wouldn't list everyone who was party to the deed. Instead, they would index the first person and add "et al" (Latin for "and others"). If your ancestor wasn't the first in the list, he would be part of the "et al."

How to work around this is to look through the index for people associated with your ancestor, especially the siblings. Are there any deeds listed as Smith, John et al? That's your clue to take a look at that deed, because there are other people besides John Smith in it.

But what if you don't know your ancestor's siblings? Look through the index for anyone with that surname. Focus first on the records of land in the same area where your ancestor was.

Looking for ways to expand your research? Subscribe to my newsletter and get my FREE guide "6 Sources to Build Your Ancestor's FAN Club"

Your Ancestor Didn't Sell the Land Himself

If your ancestor fell onto some hard times, he might have lost his land. In those cases, the deed might not reflect him as the seller. The seller might be the bank he lost it to or even the county Sheriff or other official. The deed might reference how the bank or Sheriff came to sell this land (often mentioning court cases, giving you another research lead), but how do you get into these records if you don't know who is considered the seller and you don't know who purchased it?

There are two ways around this problem. First, see if there is a geographic index to the deeds in the county. (In some places where they used a rectangular survey, it's called a Range Book.) Look up the property description and follow the transactions back to where your ancestor acquired it; the next transaction would be the next person acquiring it. Now that you have the buyer's name, you can look up that person in the grantee (buyer) index.

If the area doesn't have a geographic index, look at tax records. Real property tax lists generally include the legal description of the land. Read the tax list for your ancestor being taxed on that land. When he drops off the list, read the next year's tax list but instead of looking by name, scan the columns for the legal description. Once you find it, see who is being taxed on it. Now that you have that person's name, look him up in the grantee (buyer) index to see how he acquired it. 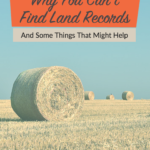