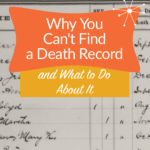 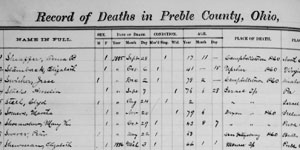 Your ancestor’s death record is one of those things that you’re supposed to have. Let’s face it — death is one event that is certain to take place at some point. Plus, death records are usually filled with all sorts of genealogical goodness. But sometimes there’s that ancestor who just doesn’t cooperate. You’ve looked and looked, but the record cannot be found. Why can’t you find that death record? Here are some possible reasons, plus some things you can do about it.

1. The Area Didn’t Keep Death Records When Your Ancestor Died

While there’s nothing you can do about a record that was never created, there are some workarounds. Think about why you wanted the record and consider some substitutes.

2. He Didn’t Die Where You Think He Did

Ancestors can be so inconsiderate sometimes. Even though he lived in a certain place his entire life, that doesn’t mean that’s where he died. Ask yourself, “Have I confirmed where he died?”

There are other sources that can give the place of death. Obituaries are a great source for this. If you know where he’s buried, look at the cemetery records and even his tombstone. Naham Hines is buried in Licking County, Ohio, but according to his tombstone, he died in Brooklyn, New York. That would explain why you can’t find a death record for him in Ohio.

If your ancestor was in the military, especially in the Civil War or later, take a look at his pension. There is often a statement about where he died.

If all else fails, start tracing his children. He may have moved to be with one of them or was visiting when he died.

Researching female ancestors can be challenging since their surnames change at each marriage. That’s hard enough, but what I’m talking about is that she might not be listed with her first name. Instead, her death record might be listed as “Mrs. John Smith,” rather than as Mary Smith. Try searching using his first name instead of hers.

For some reason, there are men who seem to keep using their initials rather than their full names. This can trip us up when we do an online search. While some databases will match “W. H. Skinner” if you search for “William Henry Skinner,” many (I’d say most) will not. Try searching with his initials (first initial only and again adding his middle initial) instead of his full name.

5. He’s Using a Nickname or a Middle Name

Names are more fluid than we generally think. Though your ancestor might have been names William Henry Skinner, he might show up in the record as Henry Skinner. Search with his middle name instead of his “real” first name.

Nicknames are troublesome, especially for women. While Williams generally aren’t listed as “Bill” on their death records (though it does happen sometimes), it isn’t unusual at all for women to be listed with a nickname or a diminutive form of their name. Search for Molly or Polly for Mary; Patsy for Martha; or Peggy for Margaret. (USGenWeb has a handy guide for nicknames.)

Don’t let those ancestors keep hiding from you. If you’re not finding their death record, consider some of these strategies to discover them. How have you uncovered some hard-to-find death records? 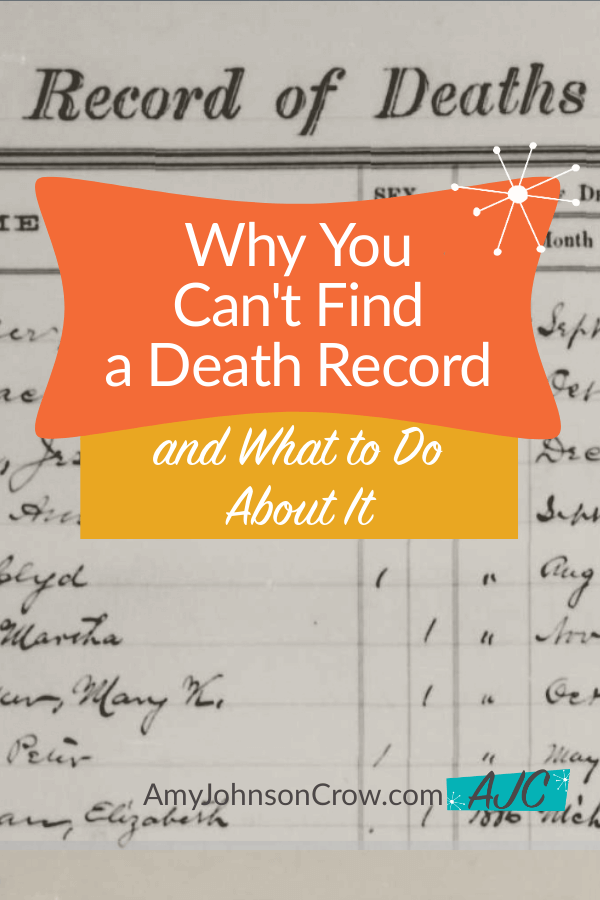