Oh, that every record we use would be filled to the brim with details about our ancestors. Unfortunately, not every record is rich in detail. But just because it's a skimpy record doesn't mean we can't use it. Here's what to do when a record doesn't tell you very much. Charmaine Szostek asked a question on Facebook about the race of someone she saw listed on the 1850 Slave Schedule. (Thank you, Charmaine, for letting me use your example here on the blog!) Here's a portion of the page that Charmaine posted:

Here is Charmaine's question: "George Lowery is one of my great grandfathers. I was trying to understand what I was reading. Does it say that his race is black?"

Learn About the Record

We always need to learn about the records we're using. That's exactly what Charmaine did when she posted this on Facebook. Here's the entry on line 36:

Charmaine was confused about what the record was telling her. Was George Lowery a black man who owned slaves?

Several people on Facebook jumped in with links to articles about blacks who were themselves slave owners. Those articles were insightful, but they didn't answer Charmaine's question: Was this George Lowery a black man?

The answer: You can't tell from this record.

So the line with George Lowery's name doesn't tell us his race; it tells us the race of one of his slaves.

Learn How the Record Relates to Other Records

This Slave Schedule is for Union Parish, Louisiana, which means that George Lowery should be listed there in the population schedule. There's one problem: There's more than one George Lowery.

Chances are that a 5-year-old isn't the owner of 41 slaves; it's more plausible that the 54-year-old George is the one. But what if the two George's had both been adults? How could we sort them out?

One of the names before George on the Slave Schedule is Solomon Feagel/Feazel. The name after George is James Lowery. On the Population Schedule, Solomon is listed the page before 54-year-old George. James Lowery is listed immediately after that George; the 5-year-old is in James's household. The only George Lowery that fits the order is the 54-year-old.

The 1850 Population Schedule doesn't list the race of anybody in Union Parish, including George Lowery. Before you start thinking that it was a lazy enumerator, he was actually following the instructions:

​(From "1850 Census: Instructions to Marshals and Assistant Marshals.")

To Charmaine's original question of "Was George Lowery black," no, he wasn't. He was white, per the 1850 Population Schedule.

Keys to Working with Skimpy Records

Don't be too discouraged working with skimpy records. The keys are to learn all you can about them so that you understand what is there, then take the next step to see how that record fits in with other records, and evaluate what you found. Even when that first record doesn't spell it out, it can lead us to the answers if we follow its lead.

Want to learn more about getting all you can out of the records you use?

My new course "Beyond the Hints" will help you make more discoveries with less frustration. The course will open in January 2018. Click the button below to be notified when the course launches. 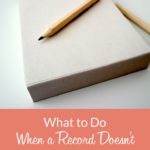