There's a hope that wells up with the arrival of an issue of a genealogy newsletter or journal. Maybe, just maybe, it will contain "﻿the﻿ Golden Article" ﻿—﻿ the one that spells out the entire family (or at least breaks down a brick wall.)﻿ We skim the table of contents, peruse the index...  and toss it aside when our ancestor isn't listed. Here are 3 reasons why you should pick up that journal and look again.

Sometimes our brick walls are there because we haven't looking in the right place yet. Reading examples of other people's research can give us ideas for more places to look.

It isn't just family histories that can give you ideas. The June 2017 issue of Indiana Genealogist has David Bailey's article "Notes on Indiana Civil War Veterans Who Were Members of the GAR in South Dakota, Part Two." Here's footnote 5:

Anyone with a Union Civil War ancestor can benefit from those resources, even if their ancestor didn't live in South Dakota. (By the way, Glorious Contentment is an excellent book for background into the Grand Army of the Republic.)

Katherine Kemnitz had a problem researching a potential Revolutionary War ancestor for a client. The veterans widow had been turned down because no record had been found, yet Katherine found what appeared to be his pay record, but it was in the packet of a different soldier. Were John Clem and John Klein the same person? She explored that in "John Clem: The Elusive Patriot" in the June 2014 Indiana Genealogist.

Kemnitz wrote that Clem's pay record was in the reference envelope of "John Klein." Were they the same person or was there a mix up? She contacted the National Archives who told her that "from 1880 to 1900, the War Department hired clerks to compartmentalize the service records of soldiers from the Revolutionary War through the Civil War. The 'reference envelopes' were created by those clerks to assist in that process, and many times, if there was only one record for a particular soldier, they would combine those materials in an envelope with another soldier."

That's a helpful bit of information to know when you're researching a Revolutionary War ancestor even if it wasn't John Clem or John Klein.

3. Ideas for How to Use Sources

Kathy Gunter Sullivan's article "Eliza Jane Henry of Putnam County, Indiana: Documenting Her Heritage" in the December 2015 issue of Indiana Genealogist is an excellent example of showing how to evaluate sources. She had the situation where a death certificate (with an unnamed informant) said one thing, but other sources were pointing in a different direction. Reading how she evaluated the sources and solved the puzzle of Eliza Jane's heritage gives insight to how to solve similar problems that many of us have in our research.

Getting inspiration and guidance from articles that aren't about your family is a good skill to work on. There are so many things in genealogy publications that can be of use, even when our ancestors aren't listed by name. Have you had any great ideas for research because of an article in a genealogy publication? Let me know in the comments! 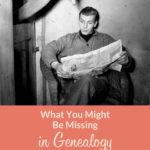