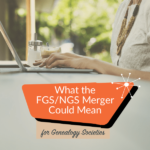 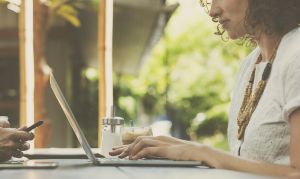 You can listen to this episode by clicking the play button below. (You can also listen on Apple Podcasts, Google Podcasts, Stitcher, and most other podcast apps.)
Length: 12 minutes.

What Is the FGS/NGS Merger

Here is the press release, issued by both FGS and NGS:

Leaders of both organizations believe this merger will serve the genealogy community by improving support of both individual members and societies in the pursuit of genealogical excellence.

Faye Stallings, President of FGS, said: “We are excited about this opportunity to combine with a premier organization that has been in operation since 1903. This will allow for improved and expanded services to help support societies.” Ben Spratling, President of NGS, commented, “We look forward to continuing the strong legacy of FGS as a ‘gathering point’ for family historians and societies all across the nation.”

That’s the end of the press release.

There was also a brief press conference after the opening session. You can watch a replay of it on FGS’ Facebook page. [Note: You’ll likely need to turn up your volume.]

The email from FGS reported that the combined conference will be 4 days, with a 5th day devoted to society management topics.

The Impact on FGS Projects

The Records Preservation and Access Committee will remain, as it is already a joint endeavor of FGS, NGS, and several other genealogical organizations.

The War of 1812 pensions project will continue as planned. The money that was raised is in a restricted account and cannot be used for any other purpose than digitizing those records.

Organizing the New Board — and What About Societies?

“We hope to merge the leadership from both organizations,” per Spratling in the press conference. The details have not been finalized on what the new board will look like.

Also to be determined is how society memberships will be handled. FGS is different in that it does not have individuals as members; it has societies as members. You and I cannot join FGS; the such-and-so county Genealogy Society can.

It’s also to be determined how societies will participate in voting in the merged organization.

Stallings reported at the press conference that it is intended that the material that would be in the FGS FORUM magazine would be incorporated into the NGS magazine. “What we are anticipating is that we’ll have a section in that [the NGS periodical] devoted to society management topics and we would discontinue the publication of the FORUM after October 2020.”

Stallings said that the merger will allow FGS to “kick up our society management related activities another notch.”

My Take on the Merger and What It Could Mean

When the news of this merger broke, almost all of the attention focused on the conferences. “Yes! I won’t have to choose which conference to go to!” “They should have combined conferences years ago!”

But there’s more to this than merging conferences. They’re merging organizations — that’s crucial to remember.

There have been murmurings of a merger for several years. But it’s almost always been on merging the two conferences, especially after RootsTech came on the scene. Very few people talked about merging the two societies.

The reason: FGS and NGS have two different missions, even though they both have a genealogy conference. NGS’s main mission is to promote genealogy scholarship and education — helping genealogists do better research. FGS’s main mission, on the other hand, is to help genealogy societies be better societies.

Becoming a better genealogist does not necessarily help you run a society better. I’ve often said that I’m more concerned about whether a society treasurer can handle a balance sheet, not whether they can handle a family group sheet.

I love genealogy societies. I think they are crucial to genealogy. Not only do they help family historians with their research, but they are the proverbial boots on the ground for work that needs done. Preserving records. Fighting for access.

Genealogy societies today are struggling. Competition is heating up for the attention and dollars of would-be members. Competition is fierce for getting and keeping volunteers. Societies often struggle with technology, social media, and marketing.

I’d love to hear your thoughts on this. Feel free to leave your comments below. 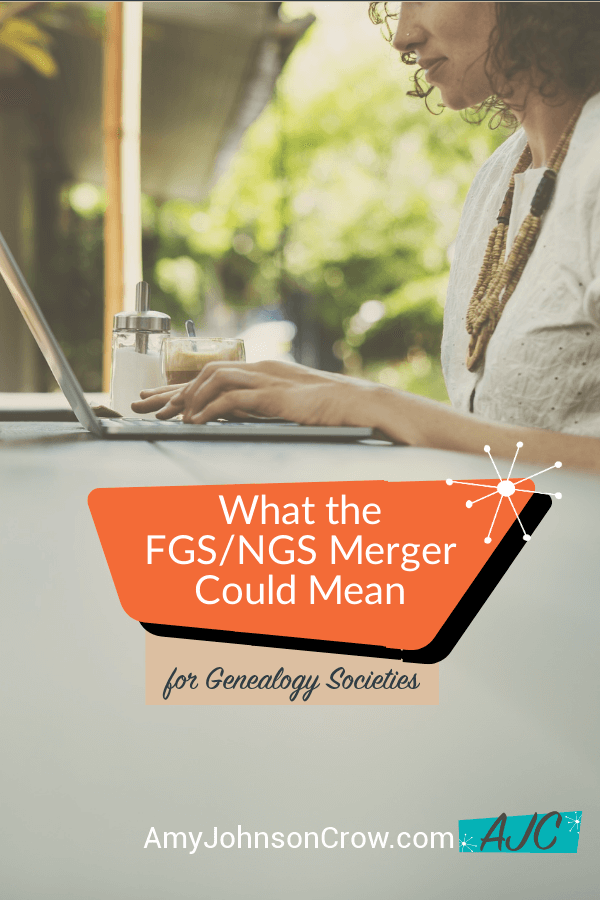