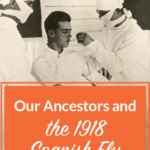 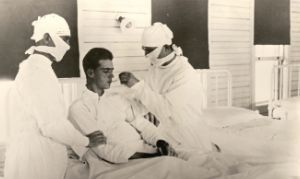 You’ve probably seen articles comparing the Corona virus and COVID-19 to the Spanish Flu. But beyond the numbers, what was life like during the Spanish Flu of 1918/1919? Social historian Lori Lyn Price has some answers.

You can listen to this episode by clicking the play button below. (You can also listen on Apple Podcasts, Google Podcasts, Stitcher, and most other podcast apps.) Length: 29 minutes.

Lori Lyn has been speaking at historical and genealogical events since 2009 and has been working on her own genealogy off and on for over 20 years. She loves social history and medicine (perhaps due to working as a statistician in medical research for over 20 years) and helping genealogists bring their ancestors to life via social and historical context. One of her favorite talks illustrates the impact of the 1918 flu through family stories she has collected. She can be found at BridgingThePast.com and the stories she has collected about the 1918 flu can be found at 1918FluStories.com. She is always looking for more stories to share about the impact of the 1918 flu.

Note About This Episode:

If you typically listen to the podcast with children, you might want to listen to it by yourself first. It is a heavy topic and we get into some rather stark details that might not be appropriate for all age levels.

What Was the Spanish Flu (and Why Was It Called That, Anyway)?

The first recognized case was in March 1918 at a US Army camp in Kansas. Doctors soon noticed more cases of flu and pneumonia, along with more deaths. Then it decreased. World War I was still ongoing, and soldiers continued to be shipped back and forth across the Atlantic.

The flu started coming back to America in late August and early September of 1918. The leading theory is that what had started in Kansas in March made its way over to the trenches of European battlefields and then mutated into the horrible virus that we know as the 1918 flu.

The 1918 flu became known as the Spanish Flu because most countries were censoring coverage of the epidemic. The first country to start openly reporting on the flu was Spain, which lead people to think that it originated there (even though it originated in Kansas).

It is estimated that 500-100 million people died worldwide, with approximately 675,000 in the US. (Based on percentages, that would equate to almost 2 million deaths in the US today).

Army camps were breeding grounds of the flu. To ramp up the number of troops, training camps were built across the United States. These camps were often overcrowded (sometimes holding 4-5 times their designed capacity). If the flu hit a camp, it wasn’t hard for it to then spread into the community.

The Spanish Flu hit in waves. In the fall of 1918, very stringent measures of closures and isolation were put into place, which helped bring down the numbers (“flatten the curve,” as we would call it today). There was a slight resurgence in November after people started coming back out again, especially when the war ended and people were out celebrating that. The Spanish Flu died out in the US in the summer of 1919.

Politicians in the US and around the world censored coverage of the Spanish Flu. However, going into early fall, 1918, people couldn’t help but know about the number of deaths. Even when officials would talk about, they would try to minimize it by saying it was just the “normal” flu; those officials quickly had to backtrack those comments.

Isolation and Realities During the Spanish Flu

In early October in Boston, schools, libraries, churches, and saloons were ordered closed. By this time, everyone knew that almost a thousand people had died just in Boston and that this wasn’t just the normal flu. There was this huge sense of isolation and fear; people didn’t know what they could do to protect their family.

In places like Philadelphia, the death toll was so high and the deaths happened so quickly that the morgues couldn’t keep up with it. The dead would be stacked on the streets waiting for somebody to come by and take them. There were some places where there were mass burials because they couldn’t keep up with digging graves individually

Dying and Funerals During the Spanish Flu

The Spanish Flu disproportionately hit healthy people in their 20s-40s. The virus attacked the lungs. With no immunity, the body would try to attack the virus, but ended up over-compensating the attack and created a cytokine storm. This ended up causing pneumonia, which is what many actually died from. (You will see this noted on many death certificates.)

Funeral homes were instructed to not allow wakes and to actually take away chairs (to prevent visitors from staying and socializing). Funerals were sometimes restricted to just immediate family members.

With so many victims being people in their 20s-40s, many children were left without parents. These children often ended up in orphanages or with family members, sometimes not in good circumstances.

Lori Lyn has anecdotal evidence that the trend was if one of the parents survived and the children were placed in an orphanage or with other family members while convalescing, they often didn’t take the children back, even later if they remarried.

Recovery from the Spanish Flu was long and people were prone to relapse if they did too much too soon. This greatly impacted families’ ability to support themselves, as breadwinners could have difficulty holding down jobs.

Lori Lyn noted that many of the stories of the 1918 epidemic are being lost, as people tended to not want to talk about it when it was all over.

Are you recording your story of what you’re experiencing now? 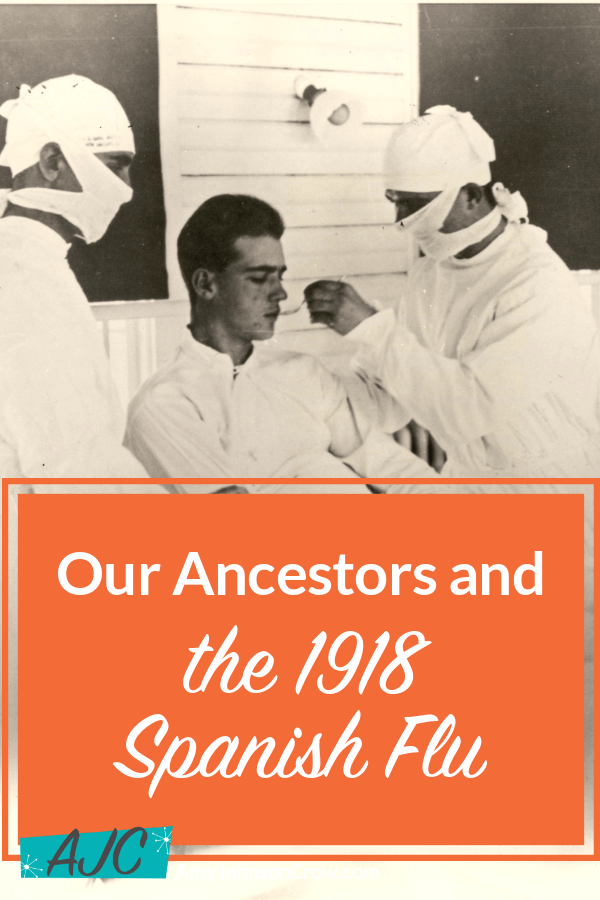