The census forms the foundation of much of our genealogy research. But there is a section of it that is often overlooked. Here is how to use mortality schedules to find even more about your ancestors. You can listen to this episode by clicking the play button below. (You can also listen on Apple Podcasts, Google Podcasts, Stitcher, and most other podcast apps.)
Length: 16 minutes.

One of the coolest finds that I've had in my research is a death record (recorded by the government) for my 3rd-great-grandfather William Skinner, who died in May 1850 in Perry County, Ohio. What's cool about it (aside from all of the details it gave me) is that it's a full 18 years before Ohio started keeping civil death records. So how did I find this death record?

What is a Mortality Schedule?

Some federal censuses took some schedules in addition to the population schedule, which is the part of the census that we typically use. In the censuses of 1850 through 1880, along with some state censuses that were taken in 1885, there is a special schedule all about deaths. These Mortality Schedules were supposed to record the deaths that occurred in that area in the 12 months prior to the official census date (1 June). For example, the 1850 mortality schedule record the deaths in that area between 1 June 1849 through 31 May 1850.

The mortality schedules was a way of compiling public health data. Many states weren't yet keeping civil death records (I'm looking at you, Pennsylvania), so the mortality schedule provided at least rudimentary statistics. They ended after 1885, as most states by then had some level of vital records by then.

What Do Mortality Schedules Tell Us?

The 1850 and 1860 mortality schedules are pretty similar. They include the person's name, the month that they died, where they were born, their age, occupation, cause of death, and the length of the illness.

Beginning in the 1870 mortality schedule, we get the family number (from the population schedule) of the family that reported the death. This can help better identify the person so you can make sure it's the person you're looking for and not just someone with the same name. We also have checkmarks if the the person's father and/or mother were foreign born.

​In 1880, we get the birthplace of the deceased's father and mother, along with the name of the attending physician. We also have sections to note if the person died in another area or if they died in that area, but normally lived somewhere else.

Where Can We Find Mortality Schedules?

Some have been digitized and are available on Ancestry or FamilySearch. Here are some of the collections you'll find them in: 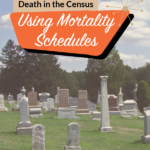