If bagpipes are the soundtrack of your genealogy, you probably have some Scottish ancestors. Tina Beaird recently shared with me some resources and methods for tracing your Scottish genealogy. You can listen to this episode by clicking the play button below. (You can also listen on Apple Podcasts, Google Podcasts, Stitcher, and most podcast apps.)
Length: 12 minutes.

Tina Beaird is the owner of Tamarack Genealogy and a genealogy and local history librarian in the Chicago area. She is an expert in Scottish genealogy.

Surname maps are one way to begin to narrow down where your ancestors came from in Scotland. (It isn't perfect, but it's a start.) Here is one of several surname maps that's available online; here is a Scottish clan map.

Look at the towns where they settled in the United States. Many, like Elgin, Dundee, and Bannockburn in Illinois were named for the home back in Scotland.

Consider the time period when they came to the U.S. There were distinct periods, each with their own origins. For example:

Before Scotland began civil registration in 1855, the recording of births, marriages, and deaths fell to the church. These are known as the Old Parish Registers (OPR).

The OPRs are available on ScotlandsPeople (www.scotlandspeople.gov.uk). ScotlandsPeople is a pay-as-you-go site; you buy credits to access the record that you want. Tina's trick for saving money: Use the index on FamilySearch, which is free. (Use the FamilySearch catalog and search for "Old parochial registers." You will likely need to view the images at a local Family History Center or at an affiliate library.)

When looking at birth/baptism records, keep an eye out for the term "natural" child; this denotes a child born out of wedlock. (As opposed to a "lawful" child, whose parents were married.)

Not Just Births, Marriages, and Deaths

The OPRs aren't just recording births, marriages, and deaths. There are also session minutes. As Tina said, "The church had their thumb on everybody." If you had an infraction such as drunkenness or swearing, you would be taken before the session to repent. (I'm guessing that's where my ancestors will be found!)

When families moved from one parish to another, they received a "dismission," which gave the name of the family and the name of the church. This certificate was then turned in at the new parish to prove they were members in good standing. Dismissions were given both when a family moved within Scotland and when the family moved to America. If you know where your ancestors first lived in America, that dismission record that they gave to their new church could give you a vital clue about where they came from in Scotland.

Finding Tina Beaird
You can find Tina at her site Tamarack Genealogy, on Facebook, LinkedIn, and many other social networks. 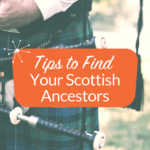