Here we go again with another round of "Historians vs. Genealogists." I usually roll my eyes at this recurring topic, but this time, I need to say something. In his April 12, 2018 opinion piece for the New York Times Sunday Review, "The Historians Versus the Genealogists," John Sedgwick wrote about what he saw as the differences between historians and genealogists. He concludes that we need both, but I must disagree with nearly every point on the way to get there.

Sedgwick's new book, Blood Moon: An American Epic of War and Splendor in the Cherokee Nation, is about the rivalry between two Cherokee chiefs on the verge of the Trail of Tears. Sedgwick discovered during his research for the book that his relative Harriet Gold was part of the story.

Sedgwick states that he has become "fairly obsessed" with his relative Harriet. That's something that a lot of genealogists can appreciate. But then he quickly adds:

"In my defense, she is a figure of genuine historical interest."

Oh really? I didn't know that a person had to be somehow connected to an epic American saga to be of "genuine historical interest."

Sedgwick's premise is two-faceted. The first is that historians do research and genealogists provide empathy. His opinion piece began with references to people taking DNA tests and using Ancestry to trace their history "back as far as they can" and makes a comment about finding you're related to George Washington's aunt (complete with a link to Ancestry's old tv commercial about that).

"Historians like me tend to scoff at these attempts."

I'm not sure which historians he's talking to, but Mr. Sedgwick would do well to talk to some different ones. Perhaps as a Harvard man, he should talk with Dr. Henry Louis Gates and learn about the impact genealogy has on understanding race. I would also highly suggest he read Helen F.M. Leary's monumental work, "Sally Hemings's children: A Genealogical Analysis of the Evidence" (National Genealogical Society Quarterly, vol. 89, No. 3, September 2001). I would also recommend contacting Dr. James Madison at Indiana University, who has extolled the virtues of genealogical research since at least 2005.

Sedgwick's second premise is that genealogists only care about their own family. Beyond the initial jabs at those who find connections to famous people (or should that be "people of genuine historical interest"?), Sedgwick makes this claim:

Mr. Sedgwick, with all due respect, you are wrong.

If genealogy is only "this matters to me," why do people volunteer every day to help identify the unclaimed bodies at coroner's offices around the country and reunite them with family?

You see, Mr. Sedgwick, history and genealogy are not "two radically divergent takes on the past." Genealogy is no longer focused on making connections with people of "genuine historical interest." (That was the prevailing mood up until the mid-1970s, as social history as a field grew and with the explosive popularity of "Roots." It is certainly no longer the case.) Genealogy now is about making connections to the past — all of it. When we make those connections, we not only understand our families better, we understand history better. We also come to know our current world better.

Genealogists, like historians, look at the past and say, "This matters."

Genealogists, like historians, look at the past and say, "This matters." 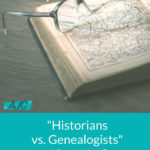