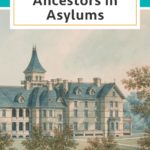 Before we get into finding the records, I want to point out some of the “other” challenges in this type of research. It can be heartbreaking to see your ancestor described as “a lunatic” or to read the conditions that they endured in an asylum.

Some might say, “But, Amy, those were the terms they used back then. They didn’t mean anything by them.” I beg to differ. In many cases, these terms were meant to label someone as “lesser than.”

Why Were They Sent to an Asylum?

Barring finding a doctor’s testimony, a case file, or a detailed petition to the court, you might not be able to determine the real cause of the ancestor’s hospitalization. First, there is the issue of vague language. Was the “insanity” actually depression? Was it epilepsy or other seizure-inducing conditions? Was it PTSD?

You also have to consider the non-medical reasons that a person could be committed. Under the guise of “insanity,” husbands could have their wives committed (involuntarily) for disagreeing with them. One such case was Elizabeth Packard, whose husband had her committed because she disagreed with his religious teachings, which was rather embarrassing for him, as he was a minister. (You can read more about causes of women committed to asylum’s in “Lunacy in the 19th Century: Women’s Admissions to Asylums in United States of America,” a paper by Katherine Pouba and Ashley Tianen of the University of Wisconsin.)

The Challenge of Finding Asylum Records

The immediate question that comes to mind when discovering that an ancestor was in an asylum or state hospital is often, “Why was he (or she) there?” Unfortunately, state law or policy often restricts the records that would give the most direct answer — an admissions application or the patient’s file.

My ancestor died in 1899 in what was then called the Illinois Eastern Hospital for the Insane (later called Kankakee State Hospital). Even though she has been dead for 122 years, I have to convince a judge to issue a court order so I can see her records.

Some states are slightly more open. Ohio, for example, use to require researchers to sign a paper that they were the “closest relative” to the patient. Now that’s only required if the patient’s death occurred within the past 50 years. However, the books are still closed from public review; researchers still have to fill out forms for specific records.

Steve Luxenberg’s book Annie’s Ghosts: A Journey Into a Family Secret is a must-read for anyone pursuing this process, especially if the patient died in the last 50 years.

[Note: the link to his book is an Amazon affiliate link, meaning that I might be paid a small commission if you purchase through that link.]

Other Records to Seek for a Hospitalized Ancestor

Although patient admission papers and case files are often restricted, that doesn’t mean that there aren’t other records that are available to us. We need to shift our focus from records created by the state to records that were created locally.

That is what I did when researching Grace Braddock, who was listed in the 1880 census as an inmate at the Athens Insane Asylum in Athens, Ohio. She was 59 years old, widowed, a native of Ireland, and listed as “insane.”

Although by law I can request Grace’s records from the Ohio History Connection, COVID restrictions have prevented research at the archives. So let’s see what else I can find about Grace and her commitment to the Athens asylum. The 1870 census places her in Perry County, with head of household Michael (age 48, presumably her husband), and Catherine (age 20), Michael (age 18), and Mary (age 13).

Typically, commitment to an asylum or state hospital initiated in a local court (often the county probate court). You stand a much better chance of accessing these records than you do getting the hospital records. There are various types of probate records, so be sure to look for all of them.

Guardianships are often involved in commitments. Though we typically think of guardianships as being something for minors, they could also be used if an adult was deemed unable to act in his or her own legal interests.

A docket essentially acts like a table of contents of the proceedings of a case, listing the type of proceeding and where it is recorded. While a docket doesn’t tell you a whole lot per se, it points you to more records and it gives you at least a timeline of the court actions.

There can be different dockets, broken down by the function of the proceedings. In Perry County, Ohio, for example, there is a separate docket to record the proceedings of guardianships. Here is the docket for Grace Braddock and her two guardianship cases.

We can see from the docket that Grace’s case numbers were 5102 and 5103. The first proceeding was the guardian’s 1st account on 31 December 1878. The last proceeding of the second case was the ward’s final account on 2 May 1893.

This docket gives us not only journals to look up, but also specific case numbers. Case packets or loose papers contain things like inventories, receipts, depositions, etc. They can be invaluable. In this filing, Edward Mackin (Grace’s first guardian) reported that he received $71.50 in the sale of Grace’s personal property.

The court journal summarizes what happened at the various proceedings in court. In this probate court journal from Buchanan County, Missouri, William Cavanas was “adjudged insane & a fit subject for the Lunatic Asylum.” It also lists a $1.00 expense for “Executing warrant by delivering Insane at Asylum.”

You sometimes come across court records that were redacted in the microfilming or digitizing process. Here’s an example from the collection of Washington probate records on Ancestry:

The person doing the microfilming placed blank cards over the entries that had to deal with insanity cases. Ancestry digitized from the microfilm, not the original records.

When this happens, look for other court records. Just because the docket is redacted doesn’t mean that the court journal is. Most court journals are arranged chronologically and have a basic index at the front.

Also, just because a docket or other record was redacted in microfilming doesn’t necessarily mean that it is redacted in person.

Local newspapers, especially in smaller towns, often ran notices of court proceedings. (Thank you, Jill Morelli, for this tip!) You might also uncover articles about an ancestor’s illness or an event that triggered the court action.

If your ancestor died in the asylum/hospital, look at death records in that county. Institutions didn’t always record patient deaths with the local health department, but it is worth a look. In fact, the Kankakee County, Illinois death records are what lead to my discovery that my ancestor was at the Illinois Eastern Hospital. The Athens County, Ohio death records include the death of Grace Braddock in the “Athens Asylum” on 11 June 1892; her cause of death was an aneurysm.

A special schedule of the 1880 census was the schedule of “Defective, Dependent, and Delinquent” classes, which gives information on the patient’s mental status and the treatments used on those who were institutionalized. You can read more about this schedule on my post, “Do You have a Defective Ancestor?”

Annual Reports and Other Sources for Context

State hospitals, being state institutions, filed annual reports. You rarely find information about specific patients, but you will find contextual information, such as the buildings’ layout, meals, and treatment philosophy. Google Books and Internet Archive are good places to look for these reports, as are state libraries and archives.

County histories are also good sources for context. Look in the histories of the county where the hospital is (was) located.

Other Resources for Asylum / Hospital Information

The Asylum Projects wiki has information about institutions across the US and around the world.

There is a growing number of projects to recognize patients from these facilities, especially those who are buried in hospital cemeteries (usually in unmarked graves). One such project is the Central State Hospital Cemetery Project, led by the Indiana Medical History Museum. Use your favorite search engine and look for the name(s) of the asylum. You never know what information you will turn up. 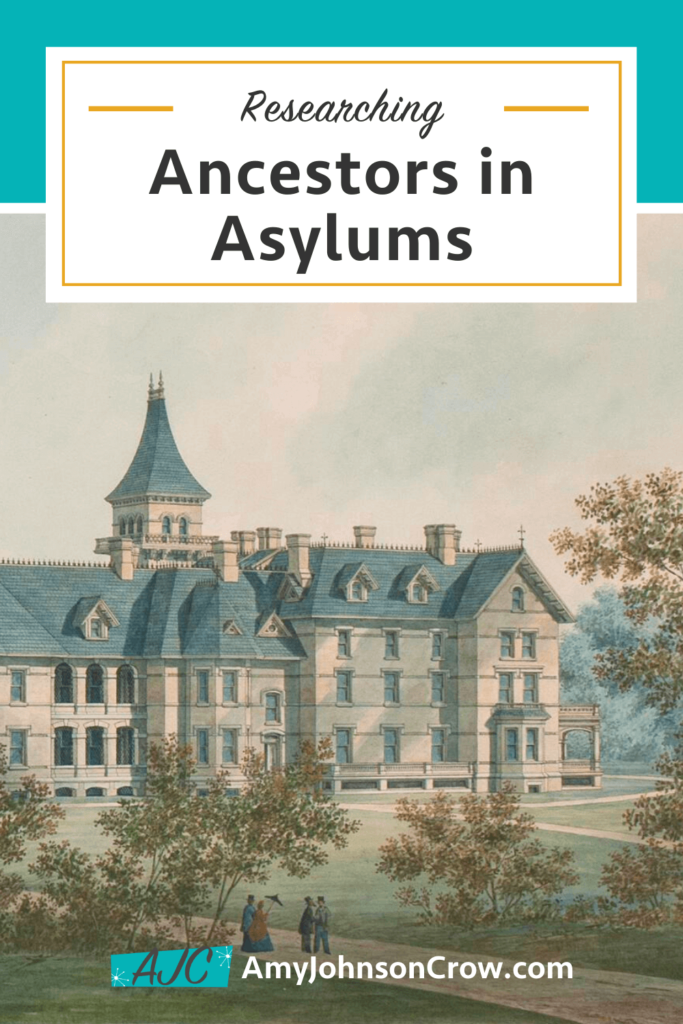