Christine Woodcock of Scottish Genealogy Tips and Tidbits ﻿wondered if large genealogy events are going the way of microfilm﻿. Though others haven't made that exact analogy, there have been comments that conferences are passé. The thinking seems to go that if the conference doesn't have huge attendance, it must have been a failure. And if it's a failure, then it must be dead.

Here's my take on it:

Genealogy conferences and seminars are not dead.

Look at the attendance at RootsTech. Yes, one could argue that RootsTech has a built-in audience with the directors and volunteers of local Family History Centers. But 20,000 of them? I've been to each RootsTech except for the first one and the attendees are from all walks of life. It isn't even close to being a Mormon-only event.

FGS and NGS draw steady numbers, as do the Southern California Genealogy Jamboree and the Ohio Genealogical Society.

So why do we seem to have this discussion every few months? Because of two myths that keep turning up.

Myth #1: Webinars and Other Online Events Are Killing Conferences​

People are wondering if the plethora of webinars are making in-person genealogy events less desirable. After all, why go to the expense of traveling to a conference (even one within driving distance), when you can watch a webinar from the comfort of your couch? Webinars and other online offerings do not automatically kill an in-person event. If you don't believe me, consider the Social Media Marketing World conference. It's sponsored by Social Media Examiner, one of the major players in social media marketing education. SME offers tons of online education, including blogs, webinars, and podcasts. Yet their annual conference draws thousands of people. (And if any field would be "virtual only," you'd think it would be social media.)

When done right, online offerings can actually entice people to attend in person. It may not be for that year’s conference, but it plants the seed of “Hey, I really enjoyed the livestreaming sessions last year. The conference is closer to me this year; I’d like to attend in person.” It’s a “try it before you buy it” scenario. And it works. (Just look at Social Media Marketing World.)

This is the same argument that came up when ebooks were invented. Weren't we supposed to have seen the end of print books by now? And what happened to that paperless society we were supposed to have? What about VCRs (then DVDs, then BluRay, then Netflix) killing off tv and movies?

There are two things to consider. The first is that different people learn in different ways. Some people don't do well learning via webinar, just like some people would rather have a root canal than go to an in-person event of any type. (Even the people who do like in-person events don't necessarily like all types of them. Some prefer large conferences like RootsTech; some prefer state or regional events; some like week-long institutes.)

The second (but related) point is that webinars and in-person events are different. There are aspects that are similar, but that cannot truly be replicated by the other.

There is room for all types of learning models in the genealogy world.

Let's Stop the Handwringing and Do Something About It

That being said, those of us who "cut our teeth" on in-person events need to realize that not everyone even knows that these events exist. There are some things that societies — local, state, and national — can do to increase in-person attendance.​ There are two basic things that event organizers need to keep in mind:

Give People Something to Look Forward to

Use Social Media to Your Advantage

I see this happen all the time. A society has an upcoming event and they post it on Facebook… once. ﻿﻿It's perfectly alright to post it more than ﻿﻿once﻿﻿!​﻿﻿ Facebook doesn’t show every post to every person who follows a page.﻿ ﻿Find different things to talk about — the speaker, the venue, the upcoming early-bird ﻿deadline﻿.

Speaker and Exhibitors: You Can Help the Event, Too!

A note to speakers and exhibitors. Help promote the events where you’ll be. Post links on social media and talk about it on your blog. Speakers: You’re not being paid based on headcount, but nobody enjoys speaking to an empty room. (BTW, if anyone is curious about where I’ll be, here's my list of upcoming speaking engagements – in-person and virtual.) Exhibitors: You can’t make sales to attendees who aren’t there. Help drive some traffic to those events.

My Take on It

Conference are not dead. In-person events and online offerings are not mutually exclusive. They fit different needs and different desires. To those who are ringing the death knell of conferences: Start working with event organizers to help get the word out and build excitement. To those who have never been to a conference, give one a try. (And if you're thinking it's too expensive, start planning now for one next year. Find a roommate to share hotel costs. Drive where possible or keep an eye out for cheap airfare. It might be more do-able than you think!)​

Do you attend in-person genealogy events? Why or why not? Let’s discuss it ﻿in﻿ the comment section below.

[Note: This post was updated from one done in 2016. See what I mean about myths that persist?! Some of the comments below reflect 2016 conferences.] 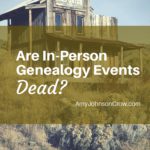