It's natural to talk genealogy at family gatherings. But if you don't want to bore your relatives who aren't as into genealogy as you are, you have to go into it with a strategy. Here are some ways to NOT bore people with your genealogy. 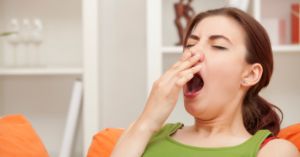 You can listen to this episode by clicking the play button below. (You can also listen on Apple Podcasts, Google Podcasts, Stitcher, and most podcast apps.)
Length: 11 minutes.

​I see posts on social media where people half-joke that their families run when they start talking genealogy. “Oh there she goes again, talking about dead people.”

While they say it sort of jokingly, there is often some truth to it. And that's a problem. What’s more, it’s a problem that we often bring on ourselves.

Are you talking about the ancestor who is buried in a pauper’s grave or are you telling about everything you went through to find that ancestor? The burned county, the missing records, the county clerk who wouldn’t let you look at the records, the late nights on the internet…

For someone who isn’t doing genealogy, hearing the trials and tribulations of solving a research problem isn’t all that interesting.

When the only stories we tell are about our research process and how difficult it is, it’s easy for non-genealogists to tune us out.

Storytelling to the Rescue

One of the first rules of storytelling is “know your audience.” What would resonate with that person? Fit your stories to the audience.

Are you going to be seeing Aunt Karen who loves to travel? Show her pictures of your ancestor’s homeland. Do you have a niece who’s getting married soon? Show her the marriage register for your Quaker ancestors and how everyone at the meeting signed as witnesses. Then you can compare how weddings today are different than weddings back then.

Remember, too, that you don’t have to tell an ancestor’s whole life story. Think about biographies that you’ve read or watched. An excellent movie that came out a few years ago was Lincoln with Daniel Day-Lewis. The movie didn’t cover Abraham Lincoln’s entire life. It focused on one specific period when he was president.

Do the same with your ancestors. Instead of trying to tell an entire life story over dinner, pull out individual stories. Let’s say you have a Civil War ancestor. Instead of telling everything about him from his birth to his death, tell about how he was in the hospital with measles for two months.

Tell about how hard it was for the widow of your Revolutionary War veteran to receive her pension.

Tell about how your 3rd-great-grandfather’s probate said that he owned 72 gallons of whiskey. (That should start some conversations!)

Show the photos you’ve found of people and places.

If you want to show documents, show ones that are easily explained and easily understood. A 102-page Civil War pension file isn't easily explained. An ad for great-grandpa's general store that you found in a city directory is.

There’s also another way to not bore people with your genealogy. Make them a part of it. Take the opportunity at family gatherings to gather stories.

Pull out the photo album. It doesn’t even need to be photos of people from the 1860s and 70s. Pull out the photos from the 1960s and 70s! Get people talking. Remember — you are a part of your family history. It’s important to record your memories and stories, as well as others in your generation.

Make some old family recipes and share those recipes with other family members. Explain why the mashed potatoes are always served in the blue bowl that doesn’t match anything else.

The key to not boring people with your genealogy is to remember that not everyone is interested in the research process... but that most people love a good story.

Our ancestors provide plenty of stories. It's up to us to share them. 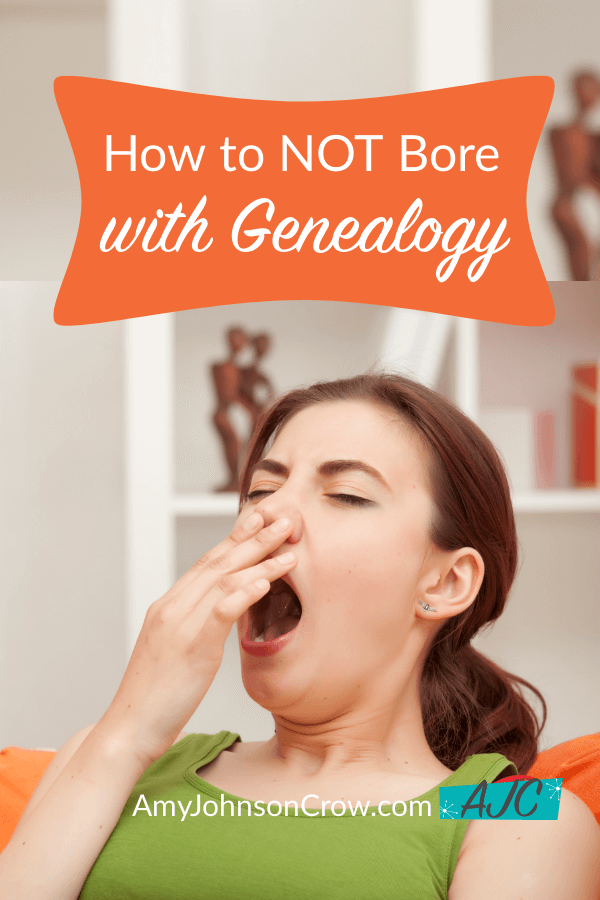 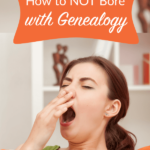