If your genealogy research takes you to Missouri, professional genealogist Kathleen Brandt has 4 places you need to check out. Show me the records! (It is the Show Me State, after all... ) Kathleen is the founder and chief researcher at a3Genealogy. She has worked on episodes of Who Do You Think You Are? (including appearing in the Tim McGraw episode), PBS' Finding Your Roots with Henry Louis Gates, and the History Channel's How the States Got Their Shape. Kathleen is based in Missouri and has some excellent insight to where we should start looking.

Click the "play" arrow to watch this short video with Kathleen's suggestions, along with what each repository has. ​​

You can find out more about Kathleen at a3Genealogy, as well as on her blog. You can also watch a previous interview with Kathleen where she shares how she approaches brick wall problems. 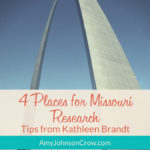