Marriage﻿ records seem pretty basic. A bride and groom, a date, and a place. (If you’re lucky, there’s a form that they filled out that includes some biographical details.) There are a couple of details that you might be missing on even the basic marriage records.

The Other People on the Marriage Record

Besides the bride and groom, there is almost always one other person listed on a civil ﻿﻿marriage﻿﻿ record: the person who officiated the wedding. If that person was a minister, that’s your clue to go looking for church records.

Their civil marriage record is typical for 1854 in Ohio. It lists the bride, the groom, the officiant, and the date and place (county) of the marriage. Pretty basic stuff.

Fortunately for anyone researching Christian and Christiana, Lindemann wasn’t a “J.P.,” which﻿﻿﻿﻿ ﻿﻿﻿﻿stands for Justice of the Peace. That’s a civil position. Unless a couple getting married by a JP has another wedding in a church, there isn’t a church marriage record for them.

But who was J.C.W. Lindemann? I did a Google search for J C W Lindeman Cleveland Minister. The first hit was ﻿﻿﻿﻿for﻿﻿﻿﻿ the “About” page of Cleveland’s Trinity Lutheran Church:

“Reverend J.C.W. Lindemann from Germany was established as Trinity’s first pastor in 1853.”

That’s consistent with a marriage date of 1854. Now it was time to look for Trinity’s marriage records. They are online at FamilySearch (Ohio, Cleveland, Trinity Lutheran Church Records 1853-2013). Two challenges: the records aren’t indexed (meaning you’ll have to browse through the images) and they’re in German. But the effort is well worth it when you find their marriage record in Trinity’s congregational register, 1853-1911:

My German is not the best, but I can pick out the following ﻿information﻿. (I bet some readers will be able to fill in the rest!)

Christian Ossmann (note the different spelling than what was on the civil marriage record), born 18 [ ? ] 1831 in Zwingenberg, Hessen Darmstadt. Christiane Egg, born in Neiss, Rheinpreussen. Married 12 February ﻿1854﻿ by a license from the Probate Court. Witnesses were Friedrich August Beisser and Tobias Ossmann.

Yeah, I'd say it was worth ﻿looking for that church record.

In some states, people had to provide bond before a marriage could take place. Often the bondsmen were related to either the bride or the groom. When those are listed on the civil marriage record, be sure to research those individuals.

Similarly in the Ossmann/Egg church marriage record, we have witnesses of Friedrich August Beisser and Tobias Ossmann. I’d theorize that at least Tobias ﻿﻿is﻿﻿ related.

Tracking Down the Minister

In this case, it was easy to find what church the minister was affiliated with. But what if Google hadn’t ﻿have﻿ been able to offer up that information? Then it’s time for good ol’ genealogy research. Look for him (or her) in county histories and city directories. Research him and find when and where he died, then look for an obituary. Contact the local genealogy society to see if the name sounds familiar to them.

Even the most basic civil marriage record can give us a valuable clue ﻿﻿beyond﻿﻿ the names of the bride and groom and the date and place of the marriage. Look closely at who married them. If he or she was a member of the clergy, take that next step and go looking for church marriage records. 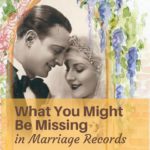