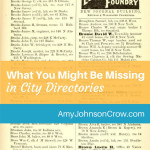 City directories (and their lesser-known county/farm directory counterparts) are fantastic resources for putting people in a specific place at a specific time. They’re also easy to use. Look up a name, find the address, and — boom! — you’re done. Or are you?

The History of City Directories

City directories are different than censuses in that they are published by commercial entities, rather than the government. They were (and are) published with the intent to sell the data and to sell advertising within the directory. (The fact that we can use them for genealogy is a happy by-product.)

Their commercial success resulted in directories being produced for cities (and even some rural towns and counties) annually across the United States. For us genealogists, that’s a goldmine of information.

City and county/farm directories are generally arranged alphabetically, which makes them easy to use. It also makes it easy to miss out on other sections of the book (or the digital images, as the case may be).

Text-speak has nothing on city directories. In order to keep printing costs down, it was important to make each entry as short as possible to reduce the number of pages. This resulted in entries like:

The first line is for Herbert Roe, but what does “(Maude) 2 ch farmer (grain & truck) T 98a rd10 Gage H10” mean? There’s a key to abbreviations at the beginning of the directory that explains it all.

With this information, we can understand Herbert Roe’s listing. He had a wife Maude, 2 children, was a farmer, specialized in grain and ran a truck, was a tenant of 98 acres, had his mail delivered from rural delivery route 10 from the Gage post office, and was located on Highway 10.

It wasn’t long before directory publishers realized there was value in listing the organizations in the area. These lists are usually located at the front of the directory. The 1881 Polk Directory for Indianapolis has several pages of churches, cemeteries, libraries, and various organizations, including:

If I had an ancestor who was a bricklayer or a mason in Indianapolis, I would want to start looking for any records that might still exist of the Bricklayers’ Union, No. 1 of Indiana.

That’s a fun fact, but is there anything else we can learn? A check of the business section and the list of advertisers yielded an ad in that directory:

While the ad doesn’t give any further information about James Comb directly, it does give us an idea about the shop where he worked.

Tip: Don’t rely on the full-text search to find ads when you’re looking at a directory online. If the ad used a fancy font, it might not be recognized accurately by the OCR (optical character recognition) software. (Which means that it won’t turn up in a full-text search.) In addition to a full-text search, go to the front of the directory and look for the section of business listings and listing of advertisers.

Even if our ancestor doesn’t have a specific place of employment listed, it’s a good idea to browse through the advertisements. How many banks were in town? How many pool halls? Was there a theater in the neighborhood? The advertisements give us an overview of the town.

City and county directories do an excellent job of placing our ancestors in a specific place at a certain time. If we dig just a little bit more, we can uncover even more, including ideas for more research and context for our ancestors. 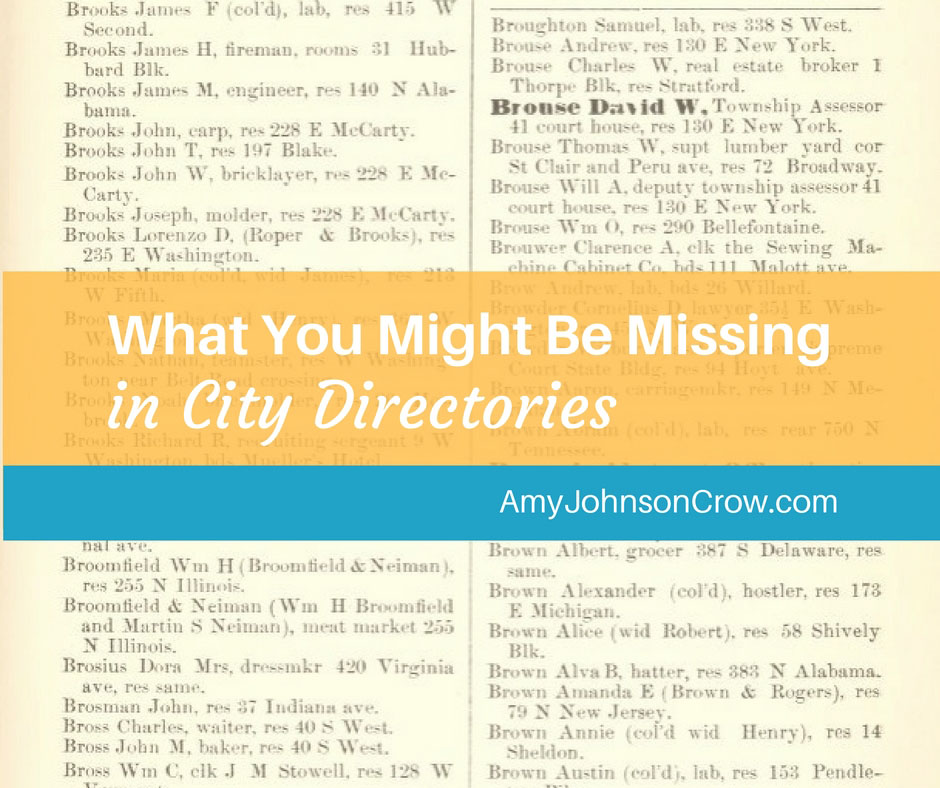