I began exploring genealogy at the end of the B.I. era — Before Internet. I had a computer, but its horsepower was roughly equal to a pocket calculator. As for doing anything “online” — there were a handful of usegroups and CompuServe forums where genealogists would talk shop, but that was about it.

To do any major research, you had to either go somewhere like a library, archive, or courthouse. Or — brace yourself — write a letter. On paper. In an envelope. With a stamp.

Databases? We didn’t have no stinkin’ databases. If we wanted to search the census, we had to do it on microfilm, which we wound by hand…. both ways.

If you’ve been doing genealogy since B.I., you have a certain appreciation for how hard it used to be. We are truly amazed at how much is available right at our fingertips any time of day.

The Internet is everywhere and I carry it with me in my purse.

A few years ago, my daughter was fascinated — and confused — by an old rotary phone at her grandparents’ house. (“How do you punch in the phone number?”) Print encyclopedias are an alien concept to teenagers. (Don’t believe me? Watch them react to a set of the World Book Encyclopedia.) We can’t blame them for their reaction — they’ve never had to use a rotary phone or a set of encyclopedias.

It’s the same with genealogy. People who came into this pursuit after the advent of the Internet are accustomed to it. They’re used to being able to look up things in their bunny slippers at 3am. Having to use microfilm to look up the census? That is so 1990s. (Consider this for a moment: 1990 was 25 years ago.)

As color TVs took over the market, they eventually just became “TVs.” There was no need to differentiate between color and black & white because they were all color. Ads today tout the quality of the color, the resolution, and the brightness of the color — but not the fact that it is color. It is assumed.

As for the TV shows, other than a vintage rerun, when was the last time you saw a show start with the announcement that it was being broadcast “in color”?

Genealogy “on the Internet”

Call me crazy, but I don’t think the Internet is a passing fad. Nor it is “cutting edge” technology. It isn’t even new.

So why are so many organizations — societies, libraries, archives — offering programs like “Genealogy on the Internet”? Considering the pervasiveness of the Internet and the length of time it’s been around, doesn’t that sound a bit dated? Doesn’t that sound a bit like the old TV shows being “in color”? (I’m having a hard time imagining “Up next: Game of Thrones — in color!!”)

A Change of Semantics

I could be wrong, but I feel fairly confident that when microfilm came into being, people didn’t say they were doing “microfilm genealogy.”

In today’s world where societies, libraries, and archives are trying to reach more people and get them in the door (physically or virtually), could using the title “How to Do Genealogy on the Internet” be off-putting to newer genealogists? Are they saying to themselves, “Duh. How else would you do genealogy?” Could it be better to instead use titles like “How to Do Genealogy”?

That doesn’t mean that we can’t have classes about the Internet and the great resources it offers. But why can’t we put the emphasis on what the person will discover, rather than the format?

For example, I have a presentation about researching Civil War ancestors. (Actually, I have a few.) I include websites and databases, but those aren’t segregated into “Now we’ll talk about the online sources.” The focus is on what they want to find and then highlighting the resource — online and/or offline — that will help them find it.

It also doesn’t mean that we can’t give Web-specific education. Every website has its ins-and-outs and its insider tricks. That education needs to be available. In those cases, it would be quite appropriate to title it along the lines of “Using <x>.com for your Genealogy” or “How to Search Better.”

It Isn’t All Online, But That’s Not the Point

I’ve spent a good part of my career working with various organizations and their online presence. In grad school, I concentrated on digital preservation and curation. I probably spend way too much time in front of a computer.

But for as much as I love the Internet and what it offers, I am the first to state that it isn’t all online.

However, that’s beside the point. Considering how much is online, how many people use the Internet, and how easy it is to access online data, why do we treat “online” genealogy as something different than just “genealogy”? We have to evaluate the source regardless of where we found it — online or offline.

Is It Time to Let Go of the Internet?

What I would like the community to consider is how we look to newcomers when we offer general “Genealogy on the Internet” classes or “Online Genealogy” tracks at our conferences. In an effort to look like we’re “with it” when it comes to technology, are we actually making ourselves look like a 1973 color tv? Can we just teach people about genealogy, regardless of where the resources reside? 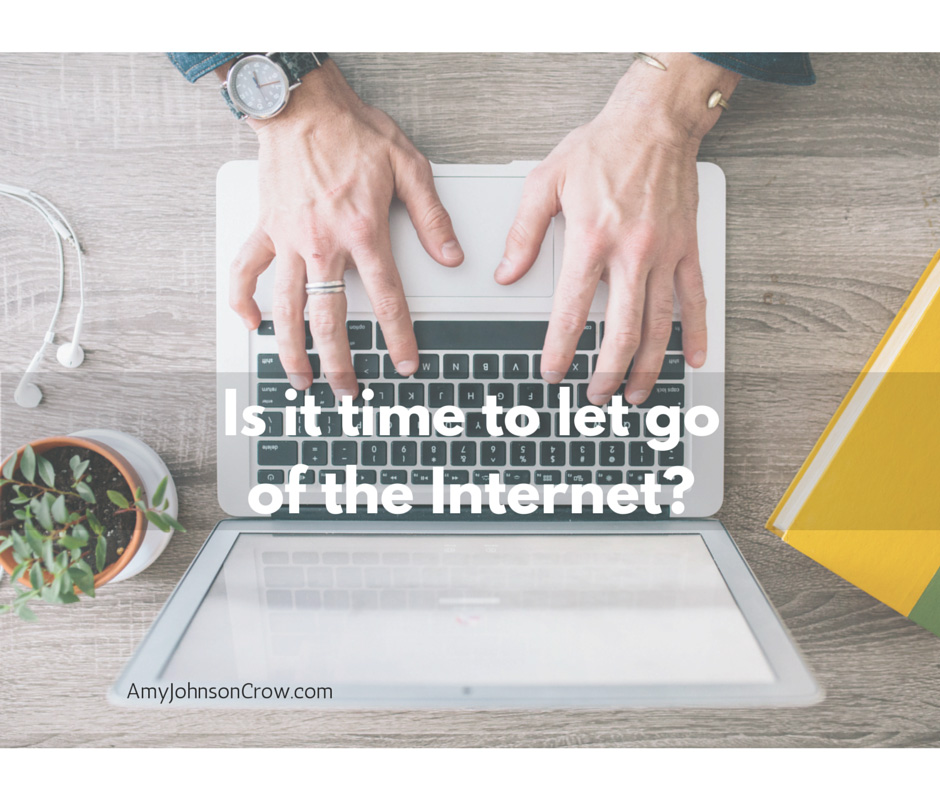