Blogging has made it possible for anyone to share their genealogy with a wide audience. No longer did family historians need to publish a book or write an article for a genealogy society publication. But the landscape is changing. Many are asking the question "Is genealogy blogging dead?"

Two long-time genealogy bloggers, Thomas MacEntee and Julie Cahill Tarr, have both posed the question recently on their blogs.​ Thomas recently announced that he is no longer going to post the Genealogy Blogging Beat or adding new blogs to the Geneabloggers list. (See his full announcement here.)  Julie has observed that many of the blogs she followed a year and a half ago have gone inactive.

Although Thomas stated in his post that he doesn't think genealogy blogging is dead, the question is lingering on social media. To figure it out, let's take a look at the blogging space.

Back in the early days of genealogy blogging, there were "blog carnivals" where people would write on a certain theme. One blog would act as the host or hub and link to the others in the carnival. Participants were encouraged to link to each other as well. They were fun, but they were also a lot of work for the host.

Then there were the "awards." Someone would design a small graphic like "Awesome Genealogy Blog Award!" and "nominate" or "award" it to 5 or 10 blogs. They would do a post with links to those blogs with the expectation that those 5 or 10 blogs would award 5 or 10 other blogs. It was basically a blogging chain letter.

Carnivals and blog awards started fading away around the time that social media, especially Facebook, became popular. However, people and organizations continue to blog.

I have had four genealogy-related blogs. I abandoned one. One evolved into a different one (the one you're reading now), and the last one (nostorytoosmall.com) is still out there, but I'm not currently posting to it. (It dear to my heart and I'm not ready to say I've abandoned it.)

The one I abandoned was very specialized. It featured cemeteries from around Ohio. I started it around the same time that I went back to school – which is not the best time to start a blog. I loved the subject matter, but just didn't have time to write.

Thomas and others I've seen discussing this have mentioned a downturn in blog traffic (the number of visitors to a blog. Traffic to my No Story Too Small blog continues to get traffic, though certainly at a lower level than when I was actively posting there. However, this blog's traffic is up from a year ago and continues to trend upward.

So how does a blog continue to get traffic?

A Change in the Landscape Facebook has probably done more to change genealogy blogging than anything else. As Thomas MacEntee noted, genealogists are comfortable on Facebook and do a tremendous amount of sharing there.

Early on in the rise of social media, some bloggers were concerned that their blogs would wither and die because of the "competition" from Facebook. It is true that people only have so many hours in the day and if all of their time is spent on Facebook, there would be no time left to read a blog.

Bloggers who were concerned saw blogging and social media as an "or" – two things that were mutually exclusive.

Social Media As a Complement, Not As Competition

Blogging today is different than it was even 5 years ago. Long gone are the blog carnivals and awards. But there are more subtle changes in the blogging world that need to be addressed.

Blog traffic (at least to genealogy blogs) is generally driven by two things: search engines and social media. If you want Google to show your blog posts, you need to be using words that people would use in their query. (Writing about your great-grandfather Mortimer Adams? Use his full name in your post rather than only referring to him as "Grandpa Mort.")

Blogs are not the same as social media. People do not consume long-form text on Facebook. (Do you remember the old "Notes" feature in Facebook? How many of those did you actually read?) People consume things there that they can digest quickly, that pique their curiosity, or that entertain them somehow.

Even the social media space has changed. Images are critical now. A Facebook post without an image won't be seen by very many people. Want people to pin your post on Pinterest? You better have a good image with it.

(Note: I'll be talking more about this subject at the Federation of Genealogical Societies annual conference in Pittsburgh on August 30. I hope you'll join me there!)

Blogs have strengths that cannot be duplicated by Facebook. The first is the ability to be found by search engines like Google. (Unless a Facebook post or status is set to "public," search engines cannot find it.) Blogs give us so much more flexibility in terms of content. They also have a much longer shelf-life than a social media post. (I've had people contact me years after I've done a blog post; that doesn't happen with social media.) For setting "cousin bait," blogging cannot be beat.

As bloggers, we need to remember that we cannot just post it and forget it. If we want to drive traffic to our blogs, we need to account for the change in the landscape. We need to harness social media (and use best practices for getting the most out of it).

There's nothing saying that you have to continue blogging. It's ok to stop if it doesn't fit your needs or your enjoyment. However, we shouldn't give up on blogging just because Facebook seems to be king. Social media hasn't killed blogging. If anything, it has given it a new lease on life. 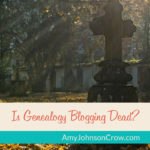