However, when a person dies intestate — meaning without a will — then the laws of the state determine how that estate was divided. You'll need to be familiar with the laws of descent for that state in that time period. For example, let's say that one of the married daughters died before her father. The law could be that her children divide what would have been her share -- or it could be that her children (the deceased's grandchildren) are left out or given only a portion of what would have been their mother's share.​

Once you know the laws of descent, you can piece together who the heirs are and how they are related to the deceased. (Need some guidance on how to find the laws of descent for a particular state? Check out Judy Russell's blog, The Legal Genealogist. She has written a ton of posts on the subject.)

What to Look For

If your ancestor died without a will, look for his probate packet (sometimes referred to as a probate case or loose papers). In that packet, look through all of the documents, but be on the lookout for something called a final distribution. This is where the money gets paid to the heirs.​

(Note: If there is no final distribution, be sure to go through all of the receipts. Look for the ones that say they are for shares of the estate, distributive shares, etc. These will differentiate them from receipts for paying off debtors or other expenses.)​

Here's an example from a case out of Vinton County, Ohio. William Bone died in 1867 without a will. In his probate packet, there is no final distribution, but there are several receipts where the heirs have acknowledged that they received payment from the estate.

From the laws of descent in Ohio at the time, when a person died intestate, the estate would be divided between the children equally. If a child died before his/her parent, that child's children (grandchildren of the deceased) would divide the share.

We know that William (the deceased) had children. It's spelled out on the first two receipts. The amount each received tells us something. Elizabeth and Samuel each received $19.78. That tells me that a full share of this estate is $19.78; that's what a child of the deceased received.

What about the other 3 people?

Aaron is a son-in-law (spelled out on the receipt). We need to do a little more digging to see if his wife (William's daughter) had to still be living at the time of William's death to have receive a share. (It's also possible that Aaron's wife is still living, but Aaron was the one who actually received the money.)

What about Henry and Henrietta? Each received a full share of William's estate — the amount that was paid to a child of William's. That gives us two possibilities for each:

Henry and Henrietta cannot both be William's grandchildren and be brother and sister. If they were siblings and their parent was one of William's deceased children, they would be splitting their parent's claim (based on the laws of descent in Ohio at that time).

Henry and Henrietta could be brother and sister. They could also be William's grandchildren. They just can't be both.

We will need to do more research to see how Henry and Henrietta fit into the William Bone family. However, by knowing how intestate cases in Ohio at that time were distributed and paying attention to how much each heir received, we have established that Henry and Henrietta are either children or grandchildren. That's something that we might not have had if William left a will.

Don't be discouraged if your ancestor didn't leave a will. Look through the papers of the probate file and pay attention to how much each of the heirs received. It might take some math, but there are clues to relationships there. 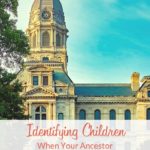