Whether your American World War I ancestor shipped out or stayed state-side, here are some tips from David Allen Lambert to help you research him. You can listen to this episode by clicking the play button below. (You can also listen on Apple Podcasts, Google Podcasts, Stitcher, and most other podcast apps.)
Length: 17 minutes.

The Misconception About World War I Draft Cards

A World War I draft card can give valuable genealogical information. However, it doesn't prove that he served in the war. It only proves that he registered for the draft.

There were 3 different drafts in the US:

Clues for World War I Service

(Note: You will also see abbreviations like Sp.Am. for Spanish-American War; Civ for Civil War; and Phil for Philippine Insurrection.)

Newspapers of the time period are valuable, as they often reported the service of the hometown boys. Obituaries can also mention service.

Look at gravestones for mention of military service. If there's a VFW or American Legion symbol, consider if the age is consistent with a WWI serviceman.

Next Steps After Confirming Service

Contact the State Adjutant General's office in the state from which your ancestor served. They often have detailed service records. (These records might still be in the AG's office or transferred to the state archives.) These records could include the DD214 (the discharge papers). DD214s are also sometimes filed in the county courthouse in the county where the soldier was living when he returned home.

Once you know the regiment(s) that your ancestor served in, research the regiment. You can often find at least rudimentary regiment histories online. If you can determine the base for that regiment, contact the National Archives in Washington for the base records. Also contact the library at the U.S. Army War College in Carlisle, Pennsylvania.

What Was Lost (and Saved) at the National Archives

The fire at the National Archives in 1973 destroyed much of the U.S. Army records for World War I (and World War II). However, the records of the Marines and the Navy survived. (Fun fact: the U.S. Navy spent much of WWI anchored off the coast of Scotland in case Germany invaded England.)

The logbooks for the U.S. Navy are at the National Archives; they have not yet been digitized. However, if you know your ancestor's ship, you can look it up in Special List 44 to see what is available and contact NARA about copies.

Review the finding aid for Record Group 120 "Records of the American Expeditionary Forces (World War I)." While the records themselves are not online, you can narrow down your request for NARA (or for when you go there yourself!)

For Those Who Didn't Come Home

The American Battle Monuments Commission is in charge of American military cemeteries outside of the United States. Their online database includes more than 30,000 Americans who died in World War I.

FindAGrave and Interment.net can also be useful.

Check with the local VFW and American Legion posts where your ancestor lived. They might have membership records.

Local/county veterans agencies might also have records, as could local historical societies. (It isn't uncommon to find files about the men memorialized on the monument in the town square.)

David Allen Lambert is the Chief Genealogist at the New England Historic Genealogical Society and co-host of the Extreme Genes radio show and podcast. You can find him on Twitter (@DLGenealogist) and his blog The Past Finder. 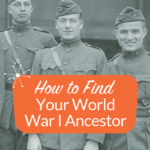