If you're one of the millions of Americans who descends from a Civil War veteran, you have a wide variety of records to explore about that ancestor. Knowing what unit he served in is key to getting into those records and making sure you have the right person. Here's how you can find your Civil War ancestor's unit. (If you're not sure if your ancestor served in the Civil War—or any war, for that matter—check out these 3 clues for discovering military service.)

Obituaries can be a great source of biographical information, including details of military service. While some obits just refer to being in the military, many will spell out the regiment, like this one for John S. Evans, who died in Minneapolis in 1904.

Look in the histories of the counties where your ancestor lived, especially those published in the late 1800s and early 1900s, when he or one of his children could have been the one giving the information.

Even if your ancestor doesn't have a biography in that county history, look for a section about the military history of the county. Most will list the units that were formed in the area. That's important because most men served in units that were raised locally. Learning which regiments were from that area will help you focus your search.

It isn't just government-issued tombstones that can list a person's regiment. Here is William Bevan's tombstone in Oak Grove Cemetery in Delaware, Ohio. It lists that he was a member of Company C, 121st Regiment O.V.I. (Ohio Volunteer Infantry). For good measure, it also has the insignia of the Grand Army of the Republic, an organization of honorably discharged Union Veterans. Although most of the 1890 federal census was destroyed, about half of a special schedule of Union Civil War veterans and widows survived. If your ancestor lived in a state that falls alphabetically from Kentucky through Wyoming (sorry, Illinois and Indiana), look him up. This schedule is available on Ancestry and FamilySearch. (You can learn more about this special 1890 census schedule here.)

If you think your ancestor fought for the Union, his pension record should be on the list of records you need to get. They are awesome, but obtaining them from the National Archives can be pricey. You want to make sure that the file you're ordering is for your guy. (They don't offer refunds if it isn't.)

Fortunately, there are two indexes that can help. The first is General Index to Pension Files, 1861-1934, which is available on Ancestry and on FamilySearch. (Thanks, Marian, for pointing out that FamilySearch now has these images!) It includes the name of the widow if she also applied for a pension. While it doesn't give a ton of biographical information, it does give us information that can help us narrow down if it's the right person. On Benjamin Ammons' index card, we see that his widow was named Barbara. If the Benjamin Ammons you're looking for had a widow named Elizabeth, you could probably rule this one out. (Or at least not order this file from the National Archives right away.)

The other index is the "Organization Index to Pension Files of Veterans Who Served Between 1861 and 1900," which is available on Fold3. (An index to this set is available on FamilySearch, but the images are not.) It typically doesn't list the widow's name, but it often lists the date and place of death of the veteran. Again, this gives us a necessary clue to narrow down the right person.

If you have a Confederate ancestor, you should explore if your ancestor or his widow received a Confederate pension. They were granted by the former Confederate states, plus Kentucky, Missouri, and Oklahoma. Many of these are available on FamilySearch. They will usually contain enough biographical information to tell if it's your ancestor or just someone with the same name.

Approximately 3.2 million men (and a few women) fought in the Civil War. It's important to identify their unit so that we can access their records and make sure that it's the right person. 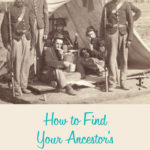