When we see a reference to how much something cost "back in the old days," it's easy to marvel at how cheap it was. But that doesn't take into account how much things cost compared to wages. So how can we tell just how much our ancestor was worth (financially)? There are some ways we can gauge the wealth of people back in the day. You can listen to this episode by clicking the play button below. (You can also listen on Apple Podcasts, Google Podcasts, Stitcher, and most other podcast apps.)
Length: 18 minutes.

Most of us don't have profit and loss statements for our ancestors, but there are records that can give a general sense of their assets (and sometimes their debts).

Notice that not only was Eber Johnson's property values listed, but so was his unmarried sister Elizabeth's.

The property values listed on the census should be taken as estimates. The person talking to the enumerator might not have known or they might not have stated accurate amounts.

Tax Records. There are generally two types of tax records: real property and personal property, sometimes called "chattel." Be careful reading the lists. Some will list both the property value and the tax assessed, other will only list the tax.

How Much Is That Today?

Having some data on your ancestor's assets is one thing, but what does that data mean? I could look at Eber Johnson's $1,600 worth of real estate and say, "Wow, that's a lot," but was it?

One way to understand that value is to convert those historical dollars into today's dollars. Such converters adjust for inflation and other factors to try to make the "old" dollars and the "current" dollars equivalent.

The easiest historical value converter that I've found is WolframAlpha. If I want to get a better sense of Eber Johnson's $1,600, I can go to WolframAlpha and enter "How much is $1600 in 1860 worth today?" (The answer: $50,870. It doesn't look like my great-great-grandfather had all that much real estate.)

Putting That Value Into Context

The downside to using a historical value converter is that it's based on national averages. The problem is that value and purchasing power can vary widely from location to location; different places have different costs of living. It's more expensive to live in San Francisco than in Fargo, North Dakota or Cleveland, Ohio. (In 2017, SmartAsset compared real estate prices across the U.S. and found that, on average, a house in Detroit went for $35.08/square foot. Houses in San Francisco averaged $902.42/square foot. Yeah, it's more expensive to live in SF.)

So how can we put our ancestor's wealth in context with his location? Newspapers, census records, and tax records.

Look at newspapers for that location and time period for want ads (showing the pay), classified ads, and sales. These will give you a good idea of the relative cost of items.

Read the tax records not only for your ancestor, but also for other people in the township. Compare his or her tax assessment to the neighbors'. Where does it fall? If his tax assessment was higher than his neighbors', that means that he had more valuable property than they did.

If I'm looking at the 1850-1870 time period, I go back to the census and collect the data for the heads of household a few pages on either side of my ancestor. (If I'm feeling really ambitious, I'll tackle the whole township.) This helps me to see where my ancestor stood in relation to his neighbors.

So Eber's $1,600 in real property doesn't translate to a lot by today's standards (about $50,000), but it put him near the upper end of the middle class for his neighborhood.

It's also interesting to do this for a period of years if your ancestor stayed in one location. Comparing property values before and after the Civil War can be eyeopening, both in the north and in the south.

We spend a lot of time looking at the names in records. With a little bit of digging, we can also use the numbers in those records to help give a fuller picture of our ancestors.

Want to see other ways you can build context for your ancestor? Download my FREE guide "6 Sources to Build Your Ancestor's FAN Club" 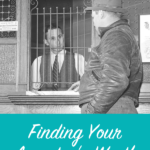