Social media and genealogy is a great combination. We can make so many more connections with more people now than ever before. But it isn't possible to follow every genealogist on social media, so how can you find more content that's meaningful to your research? One way is with hashtags. Here's how you can use hashtags to discover more things that you want to read and how to get your content in front of more readers.

What Is a Hashtag?

A hashtag is a combination of the pound sign and a word or phrase (with no spaces). For example: #genealogy or #familyhistory are both hashtags. They're used in social media to help people find content on a specific topic. (They're also added sometimes as a way to express a feeling. I might add #IAmSoTiredOfWinter on a tweet about the below zero temperatures we've been having in my part of the country.)

How to Use a Hashtag if You're Looking for Genealogy Content

Hashtags are commonly used on Twitter, Instagram, and Google+. Pinterest recently started supporting hashtags; the use of them there is growing rapidly. You can use hashtags on Facebook, but they're not commonly used and you won't get as much benefit from using them there.

As a reader, you can search for specific hashtags on social media. Let's say you're on Instagram and you want to see what people are posting about genealogy. You could look for #genealogy and you'd see posts that use that hashtag, like this one from Melissa (@genealogygirltalks):

New BLOG post! If you’re looking for pictures of your #WWI ancestors, you don’t want to miss this amazing resource I stumbled upon. It may take a little time to research, but it’s worth it if you find a photograph of your ancestor. • Let me know if you find your ancestor in the photographs. I didn’t find a picture, but I did find information regarding my 2x great grand uncle’s death during the war. • #genealogy #familyhistory #genealogygirltalks #blogging #bloggingmyfamilyhistory #bloggerslife #lifeofafamilyhistorian #worldwar1 #WWIancestors #wwisoldiers

Similarly, on Twitter you could look for #genealogy and find this tweet from the New England Historic Genealogical Society:

We have just added three new volumes to our searchable database for the Archdiocese of Boston #Catholic Records. This update consists of more than 4,600 records and 19,000 names from St. Bernard's church in West Newton, Ma. https://t.co/2IMa9gebsT #Genealogy pic.twitter.com/JpH33OXubD

Hashtags are a great way to follow along with projects and events. For example, if you want to see what people are posting about the 52 Ancestors in 52 Weeks challenge, you could search for the #52Ancestors hashtag. I follow conference hashtags such as #RootsTech and #FGS2018 both before and during the event, to see what people are saying.

How to Use Hashtags to Get People to Read Your Genealogy

Let's say that you have a blog post about a discovery you made about your ancestor. If you just Tweet "Here's my blog post about my ancestor <link>", the only people who will see that tweet are the people who follow you on Twitter. If you include relevant hashtags, you can expand your reach to people who are looking for that hashtag.

For example, I tweeted about an interview that I did with Judy Russell about the ethics of genetic genealogy:

Did you get a DNA kit for Christmas? There are some things to consider before you send in the test: https://t.co/UhEMK95Ma8 #genealogy #familyhistory #DNA pic.twitter.com/2xfA4uyT2K

By including #genealogy, #familyhistory, and #DNA, my tweet could be seen not only by the people who follow me on Twitter, but also by people searching for any of those hashtags.

Hashtags help us sort through the noise of social media. They let us find more content that is of interest. They also help us get our content to more people who are looking for what we're writing. Who knew that a punctuation mark could help do all that?! 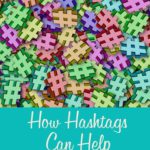