Finding a newspaper article about your ancestor can be exciting. But if you stop looking after you find that article, you might be stopping too soon. Here's how researching a tragedy highlighted the importance of continuing the search. In 1920, Eddie Moore was a 19-year-old living with his mother and stepfather in Marion, Grant County, Indiana. His ex-wife (who might not have been actually an "ex") and young child were living in Ohio. By 1925, Eddie was dead.

Eddie killed himself in Springfield, Ohio on 14 October 1925. The cause of death: "Strangulation by hanging: suicidal." (Eddie Moore death certificate, certificate number 55440 (1925), Ohio Dept. of Health, image on FamilySearch.org.)

During this time period, a suicide would have been newsworthy, so my attention turned to finding newspaper accounts of Eddie's death.

The Circleville (Ohio) Herald reported, "Jealousy over his woman companion, Mrs. Marie Shoup, 17 led Eddie Moore, 25, Marion, Ohio to hang himself in a tourists' camp near here Thursday night, authorities believe. Mrs. Shoup, who said she had a husband in Marion, was the object of attention of other men, police said. ..." 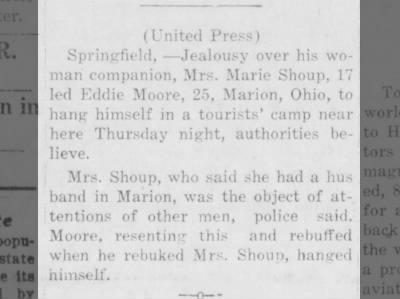 This wire service article tells us a lot more about the circumstances of young Eddie's death. It's tempting to skip the articles from the other newspapers since none of them were in Springfield and likely just reprints from the wire service.

However, newspapers didn't always print the entire story from the wire, nor did they necessarily print it "as is." Newspapers would omit some detail to fit available space or combine stories from different wire services. 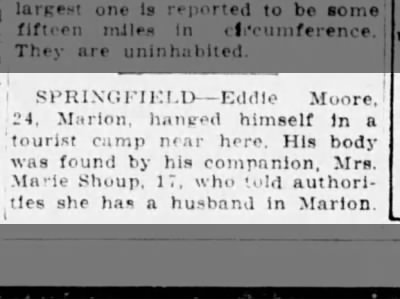 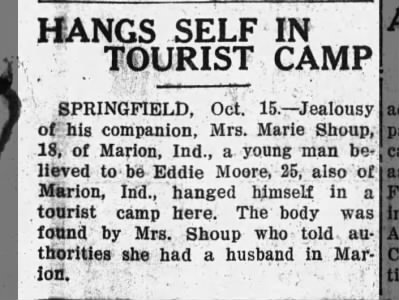 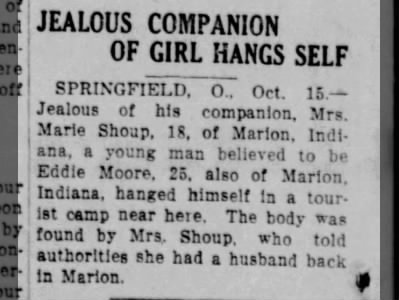 Where the Newspapers Agree... and Where They Don't

The four articles agree on the following:

The four articles disagree on the following:

Because Eddie was living with his mother and stepfather in Marion, Indiana in 1920, I suspect that the reports of him being from Marion, Indiana are correct. He's also buried in Marion, Indiana. My next steps are to follow up with the Marion (Ind.) Public Library to get copies of records they have for him in their History and Genealogy Database. I also want to look at newspapers from October 1925 from Springfield, Ohio to see if they have any articles about the event.

Different newspapers can have different versions of the same event, even when they take the article from a wire service. Whenever you find an article or an obituary for your ancestor, keep looking in other newspapers. You might find more (or different) information. (If you're stumped as to what newspapers existed where your ancestor lived, check out my article "Finding Newspapers From Your Ancestor's Hometown." 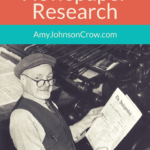