Newspapers are an incredible resource for genealogy. But with all of the mergers of newspapers over the years (not to mention those that have gone out of business), how can you find what newspapers were published in your ancestor's hometown ﻿when﻿ he or she lived there? Fortunately, there's a directory to help us out with finding old newspapers.More...

It isn't just the "regular" daily newspapers that are included. The Directory includes everything from daily to weekly to bimonthly to monthly papers (even some in that "unknown" category).

What I really like is the broad range of the types of newspapers. Sure, it has the ones that you would expect, but it also includes foreign-language newspapers. (Looking for a U.S. newspaper that was published in Albanian? They have those. What about Welsh? Yes, there are some of those, too.)

To get started using the directory, go to the Chronicling America website and click the button "US Newspaper Directory, 1690-Present."

Once you're in the Directory, you can search by location, language, labor press (did I mention it includes labor newspapers? It does.), as well as narrow it down by date range.

Recently, fellow blogger Devon Noel Lee had a German-language obituary that she thought was published in a newspaper in Columbus in 1896. I did a search for Columbus, Ohio newspapers published between 1890-1900 and were in German. Here is the list I got: When you're in the Directory, you can click on a title of interest to get more information, including what libraries and archives the Library of Congress thinks has copies.

(Thank you, Devon, for letting me use your example!)

Just because it's listed in the US Newspaper Directory doesn't mean that it's been digitized on Chronicling America (or anywhere else, for that matter). The Directory is just a listing of known newspapers. We need to take the next step to finding a copy.

As I noted, you can click on the title in the Directory and get a list of the libraries and archives that the Library of Congress thinks has a copy. This information may or may not be complete. Contact the libraries that are listed to see about availability.

Other ways to check for availability:

Go take a look in the US Newspaper Directory and let me know what surprising titles you find! 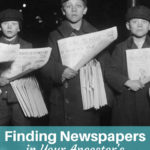