Marriage records are among the most common records that we look for in genealogy. But are you finding all of your ancestor's marriage records? If you stop looking when you find the one at the courthouse, you might be missing out on some. You can listen to this episode by clicking the play button below. (You can also listen on Apple Podcasts, Google Podcasts, Stitcher, and most other podcast apps.)
Length: 16 minutes.

Start with the Civil Marriage Record

Civil marriage records are the ones filed with a government agency or office, such as a Probate Court or a Clerk of Courts. They are the easiest to obtain because so many of them have been digitized and made available on Ancestry, FamilySearch, MyHeritage, etc. Many genealogy societies have also published abstracts of marriage records for their area.

Below is the civil marriage record for Henry Heinlen and Ella Smith, recorded in the Crawford County, Ohio Probate Court and digitized on FamilySearch. It gives basic information: the names of the bride and groom, the date of the wedding, and who officiated the wedding, "Rev. S.T. Street, Rector Grace P.E. Ch. Galion, Ohio."

But Don't Stop with the Civil Marriage Record

Here's the record of Henry and Ella's marriage from Grace Episcopal Church:

It reports that Henry resided in Bucyrus, Ohio; Ella lived in Galion, Ohio; Ella's parents were Mr. and Mrs. William Smith; and that the witnesses were "Miss Heinlen and Mr. Will Smith." In addition, the wedding took place at the residence of William Smith in Galion.

Newspapers Can Be Sources of Marriage Information

Marriage announcements in newspapers became more popular around the time of the Civil War. Here's where you have an advantage if your ancestor lived in a small town. The smaller the town, the larger the announcement in the newspaper. If your ancestors were from New York, Chicago, or San Francisco, their wedding announcement (if they had one) is likely just a line or two. Small town newspapers, on the other hand, often had lengthy articles and sometimes included photos of the bride and groom. Not only do we get wonderful biographical information (parents' names and residences), we learn they were married at St. John's Catholic Church. (It's worth contacting the church for a marriage record.) But we also get information that won't appear in either the civil or the church record: the fact that only the immediate family was at the wedding due to the death of the bride's grandmother and that they honeymooned by taking a canoe trip down the Mississippi.

Marriage announcements usually appear in the newspaper shortly after the wedding, usually within the first month.

If your ancestors made it to a milestone anniversary, especially their 50th wedding anniversary, look in the newspaper for an announcement. (Again, your small town ancestors have an advantage over their big city cousins in this regard.)

Golden wedding anniversary announcements often include biographies of the husband and wife, details about when and where they were married, and, if there was a party, who attended and the gifts they gave. It's not unusual to have photos of the couple, either present-day or a reproduction of their wedding photo.

When you have an ancestor who seemingly dropped off the face of the earth and you can't find a death record for him or her, consider the possibility that the marriage didn't end with death, but rather by divorce.

The legal requirements for a divorce vary by location and by time period. An excellent resource to get started tracking down divorce records is the FamilySearch Research Wiki. Enter the location you're interested in and see when various types of records began and where they are located. 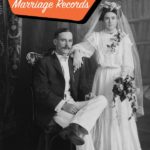