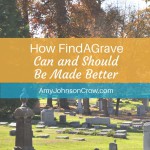 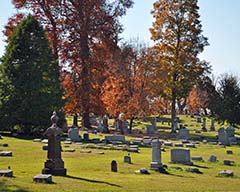 Cemeteries have a special place in the hearts of many genealogists, including me. FindAGrave has more than 154 million memorials on its site and is a valuable research tool. However, there are two key areas where FindAGrave could be made better — and should be made better.

Anyone who makes a free FindAGrave account can add memorial pages. This allows people to add tombstones they come across in their cemetery explorations as well as adding memorials for any deceased individual.

What’s good about this is that we now have a resource filled with information and photographs that we didn’t have before. We also have a way to request photos of tombstones. (Even if you can’t see it in person, there is something special about seeing your ancestor’s tombstone.)

What’s bad about this is that some people have turned it into a numbers game. They feel the need to have the most memorials and be the first to create a memorial (even before the family has an opportunity). This leads to incomplete memorials and family members feeling hurt.

My Recent Experience With FindAGrave

My father-in-law passed away suddenly a few months ago. He died late on a Friday night. The family met with the funeral director the next morning. The obituary would run in Monday’s paper. Saturday evening when I got home, feeling beyond exhausted, I thought, “I should make his FindAGrave memorial before his obituary appears in the paper. Some stranger will surely read the paper and make it instead.”

Keep in mind that at that point, I had been a FindAGrave contributor for 7.5 years. I had also worked at Ancestry and was part of the social media team, so I saw a lot of comments about people who routinely add FindAGrave memorials by reading the obituaries in that day’s newspaper. (Ancestry purchased FindAGrave back in 2013.)

Imagine my shock and dismay when I went to create my father-in-law’s memorial and found that someone else — a complete stranger — had already done it.

He had been gone less than 24 hours. The obituary had not appeared in the paper, yet somehow this stranger had created a memorial for him.

Out of curiosity, I pushed a bit further. “So, how did you come to create his memorial? His obituary hasn’t even been published yet.” The answer astonished me.

“There is another findagrave member who posts memorials and she only writes that the  information is in the paper and states the day it is in the paper and no other info. After a week or more it is no longer available online. So I try to beat her to it and post it first so I can enter all the facts. Silly, no? Funeral homes in town post obits on line right after the plans are set for the funeral and that is why. Glad I could transfer it to you.”

Here I was a longtime FindAGrave contributor and someone well-versed in how quickly some people create memorials, and even I was too slow. A total stranger created his memorial less than 24 hours after he died.

In the grand scheme of things, this isn’t the worst thing that could happen. But when you’re in grief, seeing something like that really raises your blood pressure.

This experience leads me to two suggestions on how FindAGrave can be made better.

Suggestion 1: Set a Time for the Family

Grieving family members shouldn’t have to rush to create their loved one’s memorial on FindAGrave. Call me crazy, but my first thought after learning my father-in-law died wasn’t “I need to get on FindAGrave.” I thought I was doing well to think of it before the obituary was in the newspaper.

I suggest that in the process of creating a memorial if the death occurred in the last 30 days, there is a box that the person has to check stating that they agree that they related within four generations of the deceased. (This is the same criteria as for required transfers.)

I’m not naive enough to think this will stop everyone, but it should slow down some people.

The rush for many is the numbers game. Which leads me to suggestion #2.

(EDIT: I want to be clear. Not everyone who has created a large number of memorials is in it for the numbers. There are some incredibly dedicated — and prolific! — volunteers. There are also genealogy societies and even cemeteries that are putting their records on FindAGrave. Kudos to them! But there are some people who are driven by the numbers — the more, the better. And if they can create the memorial first, that’s all that matters to them, because it makes their numbers go up.)

The problem is that for some people — a small minority of FindAGrave users — the numbers become the primary goal. This fuels the desire to create memorials before anyone else has a chance in order to drive up the number of memorials created.

Again, if it isn’t about the numbers, then why the rush to be the first to create a memorial for a complete stranger who just died?

Stop displaying the numbers and the unhealthy sense of competition that some people have goes away.

FindAGrave is an incredible tool for genealogists. It provides information that we might not have access to otherwise. However, some contributors lose sight of the fact that those memorials are for real people and aren’t just numbers on their profile page. FindAGrave can be redesigned to give family members an opportunity to create the memorials for their loved ones and also remove the competition that the numbers seem to drive. 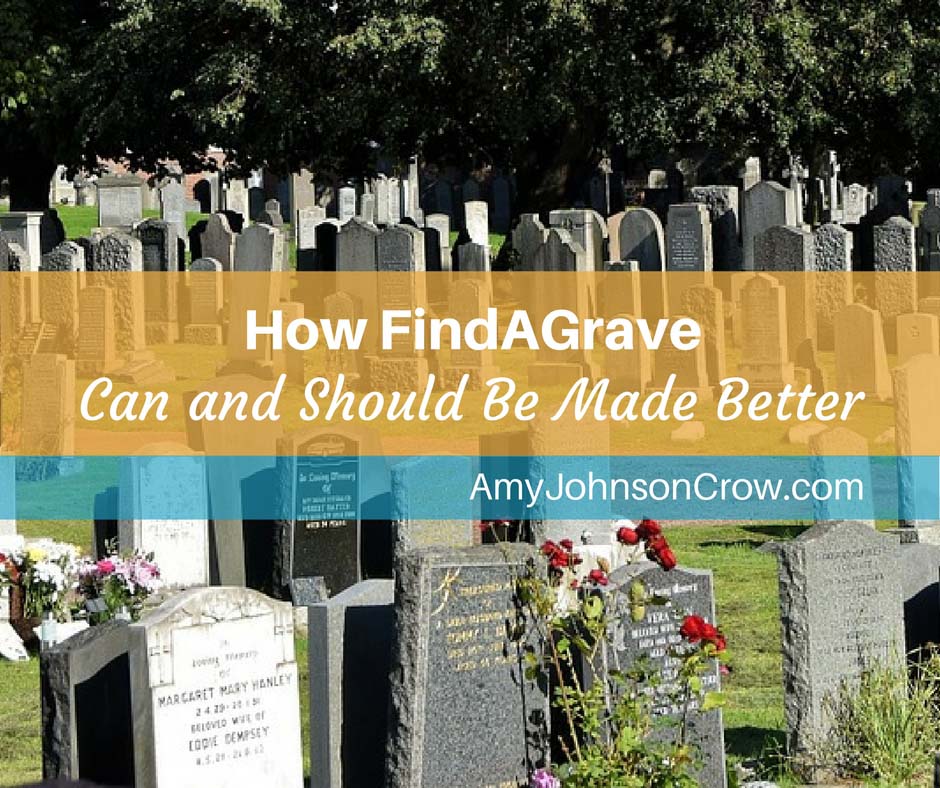