Most of us don’t have unlimited time to spend researching our ancestors. It’s natural to want to spend our research time focused on our ancestors. But when we aren’t finding the answers we’re looking for, it can be well worth our time to start researching other people — people who may not even be related to us.

Why You Want to Research Other People

Our ancestors did not live in a vacuum. They had extended family members, neighbors, business contacts, friends, and maybe an enemy or two. (Elizabeth Shown Mills refers to these "other" people as a person's FAN club -- friends, associates, and neighbors.) This has implications for us in two ways:

Both of these can benefit our research. In genealogy, researching one member of a group can lead to answers about another member of the group. We can piggyback onto these "other" people to find the people we're really looking for. Our ancestors often fall in a predictable pattern.

Research those godparents and those witnesses as if they were your ancestors. Who were their parents? Where did they come from? Who did they marry? Answering these questions can lead to answers for your ancestors.​

Let’s say that Robert and Clara Smith had a son. When they had him baptized, they named William Jones as the godfather. How does William Jones fit into this scenario? Could he be Clara’s brother? Maybe he married one of Robert’s sisters. Maybe he married one of Clara’s sisters. By researching William — a man with a surname that doesn’t seem to fit in this family — we could find more answers about Robert and Clara Smith.​

Acting in a Group

Many of us have a tale of migration in our family. (“Great-great-grandpa came to the United States from Italy.”) The part that is often overlooked is that great-great-grandpa likely didn’t do it in isolation. Chances are he either came here with a group of people and/or he was moving to an area where he already knew people.

This doesn’t just apply to moving to a new country. Our ancestors’ migration within a country (or even within a state) is often part of a group migration (people moving together all at once) or a chain migration (a few people go out ahead and other people follow later). We can use this to our advantage.​

My ancestor John Ramsey died in Fairfield County, Ohio circa 1810. He left a widow named Elizabeth along with children Elizabeth, Sarah, Thomas, Rebecca, John, Mary, and James. Based upon his children’s later census records, it appeared that he was born in Pennsylvania. Do you know how many John Ramseys are in Pennsylvania in the late 1700s? More than I wanted to try to trace.​

However, looking at John’s land and tax records in Ohio along with various records for Elizabeth, people with the surname Pedan kept popping up. Who are they?

Looking at the 1800 census of Pennsylvania, I found a Samuel Pedan living in Hamiltonban Township, Adams County. There was also a John Ramsey living in that same township. My next task was to research this Samuel Pedan.

I found a will for Samuel in Adams County. Written in August 1802, he named the following heirs:

Part of the will of Samuel Pedan, Will Book A:139-140, Adams County, Pennsylvania. Image from Family History Library microfilm 20677.

Oh, and for good measure, the Bougles (or “Bogle” as it usually is listed in Fairfield and Perry County, Ohio) also show up routinely in John and Elizabeth’s records in Ohio.

By following the Pedans — a surname that I didn’t know how it connected to my John and Elizabeth Ramsey — I not only found where John came from in Pennsylvania before coming to Ohio, but I also identified Elizabeth’s maiden name and the name of her father.

Need ideas for finding those “other” people? Download the FREE guide “6 Sources to Build Your Ancestor’s FAN Club“

Finding Your Ancestor by Researching Other People

When we remember that our ancestors didn’t live in vacuums and that those “other” people can yield the answers that we’re seeking, we can knock down some of those brick walls. It may seem like a waste of our valuable research time to research people who we don’t even know are related, but it can be time well spent. 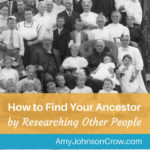