What Is Evidence, Anyway?

Evidence is when you take information and apply it to a question. There are two basic types of evidence:

Direct evidence spells out the answer. There is no ambiguity. If you ask, "When did your grandfather die?" and I answer, "He died 15 December 1980," that's direct evidence.

Here's something that you might come across in your research. If Elizabeth Henderson left a bequest in her will "to my granddaughter Rose Smith, I leave $100," that's direct evidence that Rose Smith is Elizabeth's granddaughter.

Case in point, if you ask me when my grandfather died and I respond that he died on 15 December 1980, that's direct evidence, but it's wrong. (Neither of my grandfathers died on that date. I just used it as an example for this post.) You have to evaluate the information.

Evidence is Part of the Picture

Are you trying to make sense of sources, evaluate evidence, and find more information? Check out my membership called "Generations Circle Cafe," designed to help you navigate your genealogy research with confidence. Click here for more information. 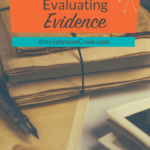