Nancy Bane was a 62 year old housewife living in Gallia County, Ohio. Her attacks of mania started when she was 47. She was often kept under lock at key for at least part of the day. William Davis entered the Gallia County Infirmary in March of 1878. "Habitually intemperate," he was there at the expense of the county.

Henry Hunson was doing 60 days in the Greene County, Ohio jail for larceny.

The terms "defective," "dependent," and "delinquent" aren't my terms. They are how Nancy, William, and Henry were described on a special schedule of the 1880 census. Once we get past the shock of those terms, we can find some detailed information about the people who were classified as such by the Federal government.

[NOTE: You might want to check out my post with my thoughts on handling the words that we find disturbing.]

The 1880 Special Schedule of Defective, Dependent, and Delinquent Classes

Besides the “regular” population schedule that we usually use in the census, some years have other schedules. In 1880, the Special Schedule of Defective, Dependent, and Delinquent Classes (sometimes called the DDD Schedule) gave further information about people in seven different categories:

Insane: The schedule lists the “form” of the person’s insanity (melancholia, mania, epilepsy, etc.), history of “attacks,” if they need to be under lock and key, type of restraints (if any), and history of institutionalization.

It’s important to remember that it was often a family member giving information about the “insane” person. Even if it was a physician, the understanding of mental health was barely in its infancy. Epilepsy was considered a form of insanity, as was postpartum depression. Where today we would recognize the problems that Civil War veterans had as PTSD, back then they were simply “insane.” (Even the term “shell shock” wouldn’t come into use until World War I.)

Idiots: An idiot for this schedule was defined as “a person the development of whose mental faculties was arrested in infancy or childhood before coming to maturity.” Questions included if the person was self-supporting, age at which idiocy occurred, supposed cause of idiocy, size of head, training school history, and other disabilities the person had.

Deaf-mutes: Enumerators were tasked with not listing those who were only deaf or hard-of-hearing or those who were only mute. “A deaf-mute is one who cannot speak, because he cannot hear sufficiently well to learn to speak.” Information includes if he or she was self-supporting, age that deafness occurred, supposed cause of deafness, history of institutions, and other disabilities.

Blind: The semi-blind could be included, but not those who could see well enough to read. The form asked if the person was self-supporting, form of blindness, supposed cause, the age that blindness occurred, institutional info, and other disabilities.

Homeless Children: This is a bit of a misleading category. Rather than for homeless children, it was for children in institutions (children’s homes, poorhouses, etc.) Information includes their residence when not in the home, if the father and/or mother were deceased, if the child was abandoned, if the parents had surrendered control to the institution, if they were born in the institution, year admitted, if the child was separated from his/her mother, the child’s criminal history, and disabilities.

Inhabitants in Prison: This section gives information about the prisoner’s residence, type of prisoner, why they are in prison (awaiting trial, serving a term, etc.), date of incarceration, alleged offense, sentence, and if the prisoner was at hard labor.

Paupers and Indigent: Similar to the Homeless Children section, this part of the schedule was for those who were “in institutions, poor-houses or asylums, or boarded at public expense in private houses.” Information includes residence “when at home,” how he or she was supported; if the person was able-bodied, habitually intemperate, epileptic, or a convicted criminal; disabilities; year admitted; and other family members in the institution (spouse, parents, children, and siblings). There was also a section at the end about the institution itself.

How to Tell If Your Ancestor Is Included in This Schedule

There are two easy ways to tell if your ancestor is listed on the 1880 DDD schedule.

Is he or she living in an institution, such as a county home, infirmary, or jail? If so, he or she is likely on at least the “Pauper and Indigent,” “Prisoners,” or “Homeless Children” lists. Depending on their mental and physical health, he or she might also be on the other schedules.

If your ancestor wasn’t living in an institution in 1880, take a close look at their census listing. Look in the section labeled “Health,” and see if anything is checked in the columns for blind, “deaf and dumb,” idiotic, or insane. If something is checked, that person should be on the appropriate part of the 1880 DDD.

Nancy Bane in the 1880 census, showing her as insane. (Click to enlarge.)

Although the 1880 DDD schedule was part of the Federal census, not all of the states turned over their copies to the National Archives. Some loaned them to NARA for microfilming; those states are available on Ancestry in the collection “U.S. Federal Census – 1880 Schedules of Defective, Dependent, and Delinquent Classes.” Some, including Illinois and Iowa are available on FamilySearch. Also look in the FamilySearch Catalog; additional titles can be found there. Some of those are also online, so be sure to click on the title to check availability.

Some states still have their copy in their state archives or state library. Also, Family Tree Magazine published a list of where some of the DDD schedules can be found. Though it isn’t comprehensive, it should give you a good starting point.

Two Last Notes About These Records

The 1880 Schedule of Defective, Dependent, and Delinquent Classes gives us great detail about these individuals. We can see what the supposed cause of their disability was, as well as glean clues for further research. (Did they attend a school? Go look for those records!)

It can be difficult to read these records. I don’t mean in terms of finding them or in the handwriting (though that can be a challenge at times). I mean it by the details you might find. Discovering that your ancestor was kept in restraints or that he was “habitually intemperate” can be disconcerting. Keep an open mind about them and the person who recorded the information. 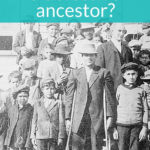