Often when we think of identifying an ancestor, we think of discovering their name. However, our ancestors were more than just names. Here's how the concept of identity not only gives us a fuller picture of that person, but also helps improve our genealogy research. You can listen to this episode by clicking the play button below. (You can also listen on Apple Podcasts, Google Podcasts, Stitcher, and most other podcast apps.)
Length: 15 minutes.

Identity Crisis at the Pharmacy

Recently, I had to pick up a prescription for my dad. The pharmacist asked for his name and his birth date, both of which I supplied. But because this was a new prescription and had more restrictions on it, I had to give even more information before she would allow me to have it.

How Identity Plays Out in Genealogy

Our ancestors were more than just their names. We need to consider other ways of describing or identifying them.

Sometimes when we think about adding more than names and dates, we call it "putting flesh on the bones." While we want to do that to make those ancestors come off the page and turn them into real people, the concept of identity—those other aspects of our ancestor's lives—can play a very practical role in our research.

For example, what if you're looking at a Civil War record that lists a man with your ancestor's name and it says he's 18. However, your ancestor was 45 at the time. While we certainly have instances of men lying about their age, but it's quite a stretch for a 45-year-old to pass for 18. We can use that age as an identifier and conclude that the record pertains to someone else, not your ancestor.

Other Ways to Build Identity

We can also go beyond just those basic biographical facts. Think about your ancestor's occupation. Does the census list your ancestor as a farmer, but you found an obituary for someone who was the president of a bank? It's probably not the same person.

Think about religion. If your ancestor was of one faith, would he be buried in the cemetery of a completely different faith? Maybe, maybe not, but it's something that we need to consider.

Along with religion, we should also consider ethnicity. These things can also play into what organizations our ancestors joined, what churches or schools they attended, which newspapers their obituaries appeared in.

Was the ancestor in the military, and if so, what was his or her military service? What about their financial status? Was he or she a land owner?

It's all these different ways that we can describe our ancestors that can help us identify them and make sure that these records that we're finding as part of our research are actually pertaining to our ancestor and not just someone who happens to have the same name.

I was doing a little bit of research on a man by the name of Joseph Bowers, who lived for time in Indiana and went out to Colorado. I didn't know exactly when Joseph died, but in some general newspaper research I found an obituary for a Joseph Bowers in the 26 November 1901 Daily Sentinel of Grand Junction, Colorado. Since I didn't know when or where Joseph died, just finding this obituary wasn't enough. Fortunately, it listed his daughters, which I knew. That allowed me to confirm that this obituary was for the Joseph Bowers I was looking for.

This obituary has lots of identifiers. It tells me the street he lived on, that he was a member of the Grand Army of the Republic, and that he was a Blue Lodge Mason. He might have been a Methodist, considering who held the funeral service. Joseph was buried in Orchard Mesa Cemetery.

TIP: Any time you find a reference to an ancestor belonging to an organization, find out more about that group.

The Grand Army of the Republic was a society for honorably discharged Union veterans. Since Joseph was a GAR member, it stands to reason that he fought in the Civil War and, more specifically, he fought for the Union. The next step was to research his Civil War service.

FamilySearch has a collection titled "United States Records of Headstones of Deceased Union Veterans, 1879-1903," which contains two cards for men named Joseph Bowers and one named Joseph Bauer. One of them was in Colorado: Identity has to be more than just a name. It has to include other pieces of information that pertain to that person. Whether it's part of the "vital" information we look for (like births, marriages, and deaths) or "extra" information (like organizations, ethnicity, and military service), we need to keep it in mind. Not only will we have a better picture of our ancestors as people, but it will help us correctly identify them in the records. 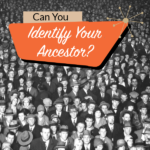