Solving a genealogical problem works best when you have a plan to tackle it. When you have a family legend mixed in, it's even more important to keep on track. Here's how I recently brainstormed a research plan. Reader Angus McIntyre contacted me with a problem that he has had researching his wife's great-great grandmother Emma Dusenberry. Here's what he sent to me:

Ok, let's start to unpack this.

The first thing to do when trying to solve a genealogical problem is define what the problem is. What are you trying to find?

Angus didn't come out and say it, but it sounds like he's trying to answer who Emma's parents are. That's what I'm going to base my plan upon. What course of action is most likely to answer that question?

Let's think about the records most likely to list the names of the parents:

What About Emma's Death?

Let's start with what we're most certain about: Emma's death. Angus mentioned that he has Emma's death certificate. I looked it up on SeekingMichigan.org and found that her parents are listed as "Dusenberry" and "Spaulding," with no first names. The death certificate states that Emma was buried in Elmwood Cemetery. Tombstones and cemeteries sometimes have additional information. I couldn't help myself -- I looked up Emma on FindAGrave. Her tombstone only has her name and years of birth and death. However, Elmwood appears to be a large, active cemetery. Suggestion #2: Contact Elmwood Cemetery to see if they have additional information about Emma Francis. (Use her married name since that's the name she was using at the time of her death.)

We have a date and place of death for Emma. Suggestion #3: Look for Emma's obituary. It may not list her parents (or you might get lucky and it does!), but it might list her siblings. "Survived by brothers, X, Y, and Z, and sisters A and B." Research the siblings and you're likely to uncover the parents. (Not George Youngblood or Hiram Francis.)

Emma was married twice. Her first marriage was to George Youngblood in December 1853 at St. Paul's Methodist Episcopal Church in Jersey City, New Jersey. Angus mentioned that he has the marriage certificate. If Emma got married in a church, there should be two marriage records: the civil record and the church record. (The church record could have more information than the civil one.) Angus didn't state which one he has. Suggestion #4: Look for the other marriage record for Emma and George. On both of the marriage records, look for witnesses; they're often related.

George (and probably Hiram) appear to be the age to be Civil War veterans. Suggestion #6: Determine if George and/or Hiram served in the Civil War and, if so, obtain their pension files. Pay close attention to the people filing affidavits on behalf of Emma. They are likely related.

We know that George died in 1869 in Michigan. What about his probate? Though he probably doesn't name Emma's parents in his probate, the executor or administrator of the estate could be related. Suggestion #7: Look at George's probate and identify the executor or administrator. Look also at who is buying items from the estate and, if applicable, who is named guardians of George and Emma's children.

Angus believes that Emma was born in New York in September 1836. Unfortunately, New York didn't keep civil birth records at that time. However, we know that she was married in St. Paul's Methodist Episcopal Church in Jersey City, New Jersey... which is right across the river from New York. Could Emma have been born in New Jersey? Unfortunately, New Jersey wasn't keeping civil birth records in that time period, either. However... what about a baptism record? Was she baptized at St. Paul's? Suggestion #8: Look for a baptism record for Emma at St. Paul's Methodist Episcopal Church. ​

The Other People in Emma's Life

Emma lived in a world that had more than her husbands. We need to identify the other people in Emma's life. As we talked about, look at the people listed in her obituary, in her husbands' probate (and possible Civil War pensions), and as the witnesses of her marriages.

We can't overlook the neighbors in the census. The first census where she has been positively identified is the 1855 New York state census. Suggestion #9: Identify the neighbors in the 1855 New York state census. Not just next-door, but also several (10-15) houses on either side. Are there any Dusenberrys living nearby? ​Even if there aren't any Dusenberrys, you don't know (yet) if any of those neighbors are somehow related to Emma.

Take those 1855 neighbors and track them in 1860 and again in 1870. Are any of them living near Emma? Even if the surname isn't Dusenberry, there's the possibility that it's a married sister. ​(Pay close attention to the ones who make the move from New York to Michigan.)

What I Didn't Focus On

​Angus mentioned that there's a family story that Emma was related to John Paulding. (Interesting that Emma's mother's maiden name is listed as "Spaulding.") While intriguing, there really isn't enough to go on with this.

The mantra in genealogy is "work from the known to the unknown." We know quite a few things about Emma. It's going to be more productive to research from her standpoint than to try to research John Paulding and try to make some sort of connection, which may or may not exist.

Thank you, Angus, for letting me feature your research problem here!

What about you? Do you have any suggestions for Angus? Do you have a question about how to brainstorm your brick wall problem? Leave a comment below!​ 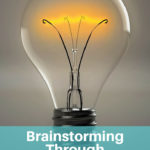