Black newspapers play a key role in African American genealogy research. Tim Pinnick shares his tips for using them (and why I think everyone should pay attention to them). You can listen to this episode by clicking the play button below. (You can also listen on Apple Podcasts, Google Podcasts, Stitcher, and most other podcast apps.)
Length: 13 minutes.

Why Everyone Should Look at Black Newspapers

Even if you're not researching an African American family, black newspapers can give context about the location where your ancestors were living. They provide another opportunity for better understanding your ancestor's surroundings.

Larger black newspapers, such as the Chicago Defender and the Pittsburgh Courier, set the standard for black newspapers across the United States. They understood that their audience was mobile, so they used a marketing strategy was much different than mainstream white papers. During and after the Great Migration, people were trying to keep track of relatives. To help with this (and to sell more papers), they set up community social columns. These community columns became the heart and soul of black newspapers.

Papers would have columns for different communities, even outside of their immediate area. Readers of the Chicago Defender could read a column about Birmingham, Alabama and could stay informed about the people, churches, and fraternal organizations back in Alabama.

It wasn't just big cities that had community columns. Tim found a column about Piqua, Ohio in a Michigan newspaper. Below is an example of community columns from Evansville, Indiana and Paris, Illinois in the Indianapolis Leader. What You'll Find in Community Columns

Tim pointed out that there is a tremendous amount of information in these columns and it's fairly consistent from city to city. It's the "mundane" things, but also marriages, sicknesses, deaths, migrations, etc.

Two of the big things are church news and fraternal orders, including events and who the members were. Finding which church your ancestor attended can open up all kinds of research possibilities.

Not every town had its own black newspaper. Tim suggests looking in the nearest larger town... but not stopping there. Multiple newspapers could have columns for the same community. (In other words, there could be a column about Evansville not only in the Indianapolis newspaper, but also in the Lexington or Chicago newspapers.) This is something to keep in mind, especially when there are issues missing from the newspaper you generally use.

ProQuest has a collection called Historical Newspapers-Black Newspapers, which has digitized copies of several large black newspapers, including the Chicago Defender and the Baltimore Afro-American. Check with your local library to see if they subscribe to this database.

The Library of Congress' Chronicling America has several African American newspapers. Go into the "All Digitized Newspapers" tab and select "African American" from the ethnicity dropdown menu to see what they have digitized.

If you want a list of known black newspapers, click the "US Newspaper Directory" tab and select African American from the "ethnicity press" menu.

For links to more digitized newspapers, be sure to look at The Ancestor Hunt, compiled by Kenneth Marks. Note: these are just those that are freely available; it doesn't count any newspapers at subscription sites like Newspapers.com or GenealogyBank.

Tim's book Finding and Using African American Newspapers is available on his site. If you email him ahead of time at blackminers@yahoo.com and tell him that you heard about it here, the price is only $10 (plus shipping & handling) instead of the regular $12.

What discoveries have you made in black newspapers? 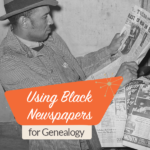