It’s thrilling to find a document that can solve one of our genealogical problems. But that thrill can turn into frustration when we can’t read a name or an important word. As we try to decipher it, it’s normal to focus on the troublesome word. However, focusing too much on that word or name could be keeping you from reading old handwriting. Here’s a way around that. The Problem with Too Much Focus​

I see this happen all the time on social media. Someone will post, “Can someone help me read this name?” and they’ll include something like this:

The problem is that we don’t have anything to compare it to. Taken out of context, this is just a scribble.

We need to look beyond the word that’s tripping us up.

Take the Blinders Off

Here’s that same word within context of the record: Now we can see other things the person wrote and start comparing. Look for things that you know what they are.

Let’s say that you thought that word was “Witt.” Compare it to “William.” The first letter in the word doesn’t look like the “W” in William. It looks closer to the “M” in “Martin” (in the first line). It’s missing a hump, compared to the M. I’m thinking it’s a capital N.

What about the next letters? Is that an “i”? Again, look at letters that you know. The two “i”s in William are both dotted, as are the “i”s in Martin, Otis, and Wilson. The word in question doesn’t have a dot. I don’t think it’s an I.

Put all together, comparing this word to other words and letters that we know, I think the word/name in question is “Nutt.”

Another Way to Get Context

When you have a document that has some boilerplate language (that is, words and phrases that appear regularly in records like the one you’re looking at), knowing what the word should be can help you figure it out. More context for the win! 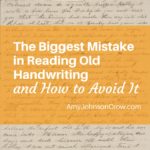