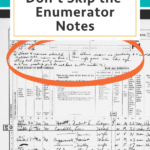 The 1950 US Census has helped countless genealogists. However, there’s a portion of the census that many people are overlooking: the enumerator’s notes. Let’s take a look at what they are, where to find them, and how to associate them with the right people.

Unlike other federal censuses, the 1950 census instructed the enumerators to make notes of unusual entries or irregular situations. (You can download the full instructions for the population schedule from the Census Bureau.) Finally, we have some insight into why some entries are the way they are!

Laura Guisinger was listed in Violet Township, Fairfield County, Ohio, but her name was crossed out and a “2)” appears next to her name. If you look in the notes section near the bottom of the census page, you’ll see, “2) She Died in Feb. 1950.”

Where Are the Enumerator Notes?

How Can You Tell What Note Goes With Which Person(s)?

Just how the notes about unusual entries were to be recorded was apparently up to the enumerators. Some enumerators included the line number in their notes. (That makes it easy for us to figure out who it’s about!) On this page, there’s a note “L-24 Will retire in Sept.” Line 24 is John Petentler, age 61, who has no occupation listed.

Some, like the one who erroneously enumerated Laura Guisinger, gave a footnote number near her name. 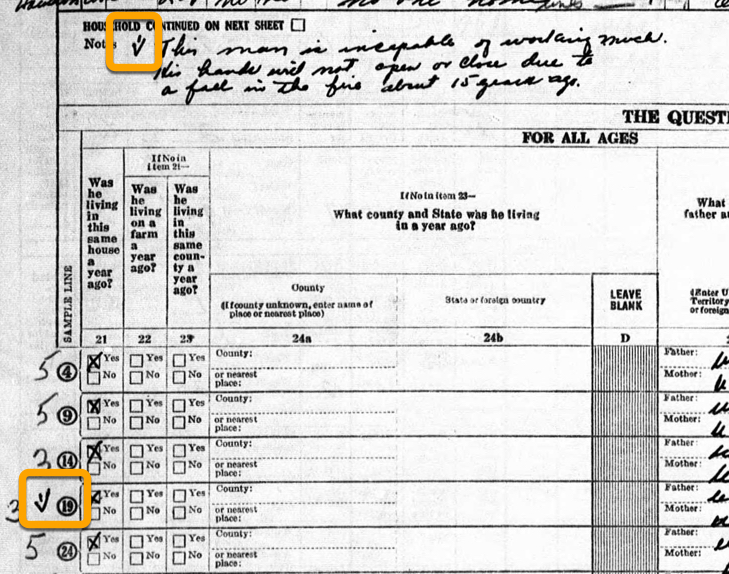 Footnote numbers can also appear in the box with the information that the enumerator wants to explain more fully. That’s the case with this entry from Champaign County, Illinois. Note 2 on this page reads, “This man is probably 65 or older. His wife gave me this age.”

I can see why the enumerator wanted to call attention to that!

Make a Habit of Reading the Notes

The enumerator notes can give valuable information about the people listed in the census. It’s easy to miss the footnote numbers that some of the enumerators made. As I’ve been doing my own 1950 census research, I’ve been getting into the habit of reading the notes on all of the pages where my ancestors are listed. Then, I identify who those notes pertain to. I want to make sure that I’m getting all of the information I can about my ancestors.

Have you found any interesting enumerator notes in the 1950 census? 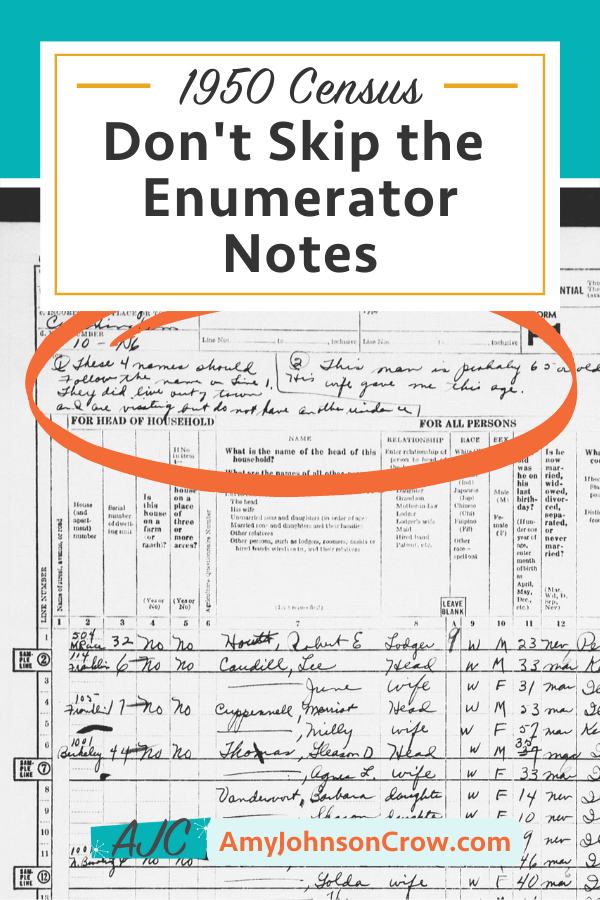