The federal census forms the foundation of much of our genealogy research in the United States. But there is a gaping hole between 1880 and 1900 due to the loss of the 1890 census. However, there are sources we can use to fill that 1890 census gap. There was an 1890 census. (The key word being "was.") Unfortunately, there was a fire in the Commerce Building on January 20, 1921, which damaged many of the records. Not everything was destroyed in the fire itself, but for reasons that are still unclear, the remains of the records were destroyed in 1935. (The National Archives has an article that outlines what happened.)

Filling the Gap Left by the 1890 Census

Before we fill in the gap left by the destruction of the 1890 census, we need to consider why we use a census. Knowing the "why" will help us think of other records that can give us the same type of information. Here are three big reasons genealogists use census records:

With those reasons in mind, let's look at some records that can fill in the 1890 census gap.

Directories are almost like mini-censuses. They list the head of household (sometimes including the spouse), occupation, and place of residence. Some will give more detail, such as where the person works and number of children.

Directories allow us to group people together by residence. Take a look at this listing of Gilmers in the 1890 Greensboro, North Carolina directory:

Besides the occupation and race (the "col" is an abbreviation for "colored"), we can see groups of Gilmers. Jim, Judie, Mack, and Tom Gilmer are all listed as having a house in Warnersville. (It isn't clear if it's the same house.) Lena and Nicey are both listed at a house at 229 E. Sycamore. This isn't proof that Jim, Judie, Mack, and Tom are related or that Lena and Nicey are related. It does, however, put them in the same place at the same time. It's worth following up on that lead.

The federal government wasn't the only entity that conducted censuses. Many states took their own censuses. They might not be exactly from 1890, but they can help fill in that 1880-1900 void. New York, for example, had a state census in 1892.

Not all states took their own census. Use the FamilySearch Research Wiki to see what exists for the states you're interested in. (Spoiler alert for Ohio researchers: there isn't an Ohio state census. I'm sad about that.)

Tax lists might not be the most riveting source you'll ever use, but they are so handy. Governments have a vested interest in having them as complete as possible, which is always a boon to our research. Keep in mind, however, that if you're looking at a real estate tax list, the taxpayer might not actually live on that land; he or she is taxed where the land is, not where he or she is living.

Like tax lists, voter lists aren't the most robust of records. They are typically just lists of names and, sometimes, party affiliations. But they do put a person in a specific place at a specific time. Remember, though, who you won't find on a voter list in this time period: Women.

Want context? Look in the newspaper. Think beyond the obituaries and look in the society/gossip columns. You'll be amazed what you can find out.

We usually think of church records as something to use as a vital records substitute, but they can also fill in for censuses. Church rosters and church membership directories can give us valuable information. Here's a section from the directory of the Sacramento Avenue M.E. Church in Chicago, 1889:

Land records give us some of the information that we seek in a census, including residence and (sometimes) relationships. (Check out this post for more that you can find in deeds.)

8. Surviving Fragments of the 1890 Census

Between the fire and the later disposal of what was left, we lost about 99% of the 1890 population schedule. However, if you're lucky, you might find your family in the approximately 6100 records that survive. This fragment is available on FamilySearch and Ancestry.

Where you're likely to have more success is with another schedule from the 1890 federal census: The Special Schedule of Union Veterans and Their Widows. Not all of this schedule survives, either, but there is much more of it than the population census. The Union veterans schedule survives for about half of Kentucky through Wyoming, plus the District of Columbia. There are also some pages for California, Connecticut, Delaware, Florida, Idaho, and Kansas. This collection is available on FamilySearch and  Ancestry.

Want to get more from your online searches? Subscribe to my blog and get a free copy of my guide "5 Online Search Strategies Every Genealogist Should Know"

What genealogy problem do you have because of the lack of the 1890 census? How have you tried solving it? Let me know in the comments! 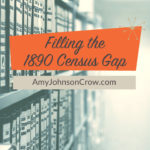