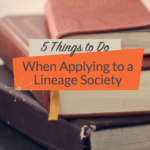 You’ve decided this is the year. You’re finally going to apply to that first families program, the DAR, or whatever your lineage society of choice is. Before you fill out the form and send in your check, here are 5 things you should do when you’re applying to a lineage society.

Different societies have different rules about what they will accept as proof. Some require certified copies; others will accept regular photocopies. Some will accept sources like a book of tombstone readings; others won’t. The society’s rules for documentation should spell it out.Even if you’ve applied to that society before, don’t assume that the rules are the same now as they were then. They could have tightened up the requirements. They also could be like the DAR and started accepting DNA as proof.This is also a good time to see how the society wants you to label your documentation. Some will want a citation written on the front; some will want you to number the document and put the citation on a separate numbered list.

2. Make a Work-in-Progress Copy of the Application

There are a lot of things that will need documentation. Generally, you’ll have to document each person’s birth, death, marriage, and proof connecting them to the generation before. You’ll also need to prove whatever criteria your ancestor fits. (If you’re applying to the DAR, that would be proving your ancestor’s patriot service. If it’s for a first families program, it’s proving residency before a certain date.)

What I’ve found helpful in applications that I’ve done is to take the application form, fill it out, and make a red checkmark next to every event that I have documentation for. It’s an easy way to see exactly what I still need to compile. When I’m ready to apply, I fill out a new copy to send in.

3. Make Copies of Your Documentation

Never EVER send in an original record or photograph. Always send a copy. First, you probably won’t be getting your application back. (Preserving your research is one of the reasons for applying in the first place.) Second, if your application would get lost, that documentation would be gone. Lots of copies keep stuff safe. Send a copy. While we’re on the subject, put those copies in a file folder just for your application. This will save you a TON of time later when you’re ready to send it in.

You might have questions even after reading the current rules for that society. If you do, ask! The registrars and chairpeople want you to succeed. They want you to honor your ancestor. They’re not trying to trip you up. (If there is a registrar or chairperson out there who IS trying to trip up applicants, stop it! This is supposed to be a positive experience!)

Not to say that they won’t enforce the rules — the rules are there for a reason. They will help you interpret them. But you need to ask.

If the society you’re applying to has a deadline, don’t wait until the week before to start working on it. Believe me, it will take you longer to compile than you expect, especially if it’s your first time applying. Give yourself time to compile and to ask questions. You’ll also want to leave yourself time to get any further documentation that the society asks for.When I was chair of First Families of Ohio, we had a December 31 deadline for induction at the OGS annual conference in April. It never failed that the majority of the applications came in during the last two weeks of the year. The applications were reviewed in the order received. I felt bad for the ones that arrived on December 31, as they usually weren’t reviewed until late January. It often happened that at least one of those applicants didn’t have time to get more proof that was needed. Start early.

Need tips for evaluating your research? Subscribe to my FREE newsletter and get my guide “How to Evaluate What You Already Have”

If you’ve applied to a lineage society, what advice do you have?