It’s sad — and rather frustrating — to go to a cemetery, take some photos, and realize when you get home that those photos don’t really help you. (It’s especially frustrating when you’re not able to get back to take more photos.) To help ease the frustration, here are 5 cemetery photos that you should get in the habit of taking every time:

The cemetery sign should be the first photo you take each time you go to the cemetery. I know it feels a little strange to take a picture before you even get into the cemetery. Honestly, this was a hard habit for me to get into, but I am so glad I did!

When you go to several cemeteries, you can lose track of which one was which. Having the sign as the first photo for that cemetery, you never have to wonder later, “Which cemetery was this?” All you need to do is scroll back through your photos until you get to the cemetery sign. Not all cemeteries have a sign like the one for Havens Cemetery. In those cases, make your own. Write down the name (or the location if you don’t know the name) and take a picture of that.

I like to get a picture of the entire tombstone, even if I can’t read all of the details. (More on that in a moment.) You wouldn’t photocopy just one paragraph of an ancestor’s will. Treat the tombstone the same way: as a document. Get a photo showing the whole thing.

EDIT: Make sure you get photos of the back and sides of the stone, too! (Thanks to everyone who reminded me that I forgot to mention it!) There are often details that aren’t legible in the photo of the entire tombstone. That’s when you want to take close-up shots. Take photos of the name and dates, the epitaph, symbols, and other details. (Take them from several angles to improve your odds of reading them later.)

Here’s a closeup of Nellie’s name and dates: A closeup of the epitaph:

Clasped are her [?] / Over her pulseless breast / Angels have taken our darling / Nellie has gone to rest. [EDIT: Thanks to those who deciphered the last two words of the first line as "dimpled hands."]

If you want to have some hope of finding that tombstone again, take several steps back and get a photo of the tombstone and the stones around it. This helps give you landmarks for finding it again. Little Nellie’s tombstone could easily be overlooked. But the larger Edgar tombstone stands out more. I can look for that stone again and know that Nellie is right in front of it. Nellie's stone in context with its surroundings

(Yes, I know that smartphone cameras can geo-tag a photo. But what if you don’t have cell coverage at that cemetery or you’re not using your phone? And what if you’re like me and have geo-tagging turned off?) Walter, son of D & K Sager is buried next to Nellie.

Our ancestors are often buried near other relatives. Get photos of the surrounding tombstones (including closeups of the inscriptions). Even if you don’t know how (or even if) those people are related now, you’ll have the information for when you do more research on the family later.

Get in the Habit

It’s so easy to take tons of photos at the cemetery. Getting into the habit of taking these 5 photos will help you be less frustrated when you’re looking at them later.

What’s your “must take” photo at the cemetery? 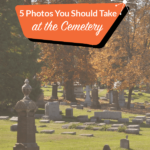