There are so many different types of sources that we can use in our genealogy. But no matter what type of source you're using, there are 4 things that you should do to get the most out of it. You can listen to this episode by clicking the play button below. (You can also listen on Apple Podcasts, Google Podcasts, Stitcher, and most other podcast apps.)
Length: 11 minutes.

What Is a Source?

A source doesn't have to be something that you find at a courthouse. A source is whatever you use to get a piece of information. It could be a will, a death certificate, or a tombstone. It could be a conversation that you had with your Aunt Ethel at the last family reunion. Sources take all different forms and shapes.

You might think that you're reading the whole thing, but be honest. Are you really reading all of it? I've seen firsthand — witnessing people do this and doing it myself! — that the more excited you are to find a record, the more likely you are to skim it, looking for the piece of information that you want. What we all need to do is take a minute and actually read the entire document word for word.

2. Identify All of the People and Places

There are clues beyond the references to your ancestor. Looking at all of the people and places that are mentioned can help put that record (and your ancestor) in context and generate ideas for more research. When you look at a marriage record, for example, did you notice the name of the person who officiated the wedding? Was that person a minister? If so, there could be a church record in addition to the civil record you found at the courthouse. What about the witnesses of that marriage? Are they listed on there? Could they somehow be related to the bride and groom?

We also went to identify all of those places that are mentioned in the source. When you're looking at a deed, did you notice the residence of the grantor and the grantee? It might not be the same location as the land.

The third thing that you should do with any source that you're using is to identify any of unfamiliar term.

The further you go back in your research, the more likely it is that you're going to come across terms that you're not familiar with. I remember the first time that I was working in land records and saw that the land was being sold "with all appurtenances." I had no idea what an appurtenance was, so I looked it up so I could understand the record better. (According to Merriam-Webster, in a legal sense, an appurtenance is "an incidental right (such as a right-of-way) attached to a principal property right and passing in possession with it.") ​

The fourth thing that we need to do with whatever source we are using is to consider the source itself. Are we using the actual record or are we using a transcript or an index of it? We should always ask ourselves, is there something better that we could be using?

In #genealogy, we should always ask, "Is there a better source that I could be using?"

Using a book of will abstracts published by the local genealogy society is not the same thing as using the will itself. There could be (and probably is) more information in the will then what made it into the book. There's also the possibility that something was either misread when they created the abstract or there was a typo or something interpreted incorrectly. 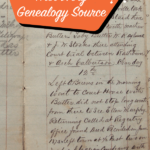