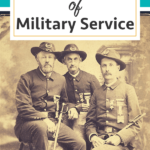 Digging into military records can yield an incredible amount of information about our ancestors. (My favorite is my 3rd-great-grandfather’s Civil War pension file. It showed that he married his second wife 12 days after she divorced her previous husband. Yeah, that.) While some records will spell out military service, there are times when we need to tease that fact out. Here are clues to look for to discover your ancestor’s military service.

Henry Clay Ruby’s obituary doesn’t come out and say that he was a Civil War veteran. However, it does state that he was a member of the O. P. Morton post, Grand Army of the Republic. The GAR was an organization comprised of honorably discharged Union veterans. Knowing about the Grand Army of the Republic gives us the clue we need to start exploring Henry’s Civil War service. Taking a few minutes to learn about the organizations listed in any record can give you great clues to follow up on.

Not all information on tombstones is words and numbers. Not to sound like The Da Vinci Code, but there can be meaning in the symbols. Look for things like crossed swords, crossed flags, cannons, etc. One symbol that often isn’t a clue to military service is the anchor. An anchor on a tombstone is often used as a symbol of hope.

We can get so focused on the names and relationships in the census that we skip looking at the whole record.

In the 1910 census, Question 30 (yes, 30!) lists whether the person was a veteran of the Union Army (UA), Union Navy (UN), Confederate Army (CA), or Confederate Navy (CN). Below shows what you’re looking for:

When you’re looking at the 1910 census, be careful, as the Census Bureau also used those right-hand columns for statistical notations.

The 1840 census listed Revolutionary War pensioners by name and age. What’s neat about this is that the pensioner might not be the head-of-household, who is typically the only person listed by name in the 1840 census. There’s also the 1890 Special Schedule of Union Veterans and Widows.

What’s been your best military discovery?