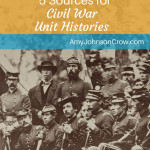 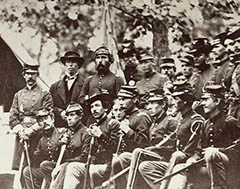 Broadening your researching into your Civil War ancestor beyond the pension records and service records can reveal new insight into the time he served. Unit histories can help you pinpoint where he was, what battles he fought in, what those battles were like, and other information that helps build context. Here are 5 sources for Civil War unit histories.

Most published Civil War rosters have at least a brief unit history at the beginning of each regiment’s listing. They usually aren’t extensive but do give the basics such as when and where the regiment mustered in and out, and which battles and campaigns they participated in.

2. Dyer’s Compendium of the War of the Rebellion

Frederick Dyer took on the task of compiling the definitive history of the American Civil War. His Compendium is comprised of three parts: Number and organization of the Armies of the United States; chronological record of campaigns, battles, etc.; and regimental histories. It has become a staple of Civil War research. For our purposes here, parts 2 and 3 will give us the information we’re looking for.

You can find Dyer’s Compendium in several places online (and in print in larger libraries). There are at least two copies of it available on Internet Archive (here and here), but both are difficult to read. Numerous websites have transcribed Dyer’s in whole or in part. The Civil War Soldiers and Sailors System uses it in the “Regiments” section of the website.

(This probably seems obvious, but I’m throwing it in anyway!) After the war, some veterans took it upon themselves to write a history of their regiments. Some are reminiscences of members of the unit; others are scholarly treatments of the unit’s activities. Many feature a roster and/or a list of those who died during the war.

Look for digitized unit histories on Google Books, Internet Archive, and the Digital Public Library of America. Use WorldCat to find additional histories that have not been digitized.

Beginning in the late 1870s and continuing through the early 1900s, it was common for Civil War regiments to have reunions. Many of these reunions published booklets with short histories, reminiscences, and rosters. It’s also not unusual to find obituaries of members who died since the last reunion. Like the published unit histories, look for these on Google Books, Internet Archive, DPLA, and in WorldCat.

Don’t think about just those sources created after the war. Soldiers often wrote to their hometown newspapers to give first-hand accounts of their activities. (Well, at least the “official” activities.) Even if your ancestor wasn’t the one writing the letters, they can give insight into what he was going through.

A note about looking through digitized newspapers: If you’re using the full-text search feature in a digitized newspaper, be sure to play around with the search terms. A search for “7th Ohio” won’t find an article that calls the unit the “Seventh Ohio.” “Ohio Heavy Artillery” won’t match “OHA.” “12th Indiana Infantry” won’t match “12th Indiana Regiment.” Take your time and be creative.